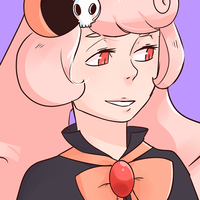 Hiema, but only by Aesie.

Summer, heat, humidity, not being allowed to sleep in, being woken up, bright lights, sunshine, working, effort, dense desserts, losing, when people touch her stuff.

Hiemalis is a master of crocodile tears and puppy-dog eyes. She pretends to be weak and emotional in order to get people to underestimate her, pity her, and/or take her along. She'll go on about how weak and helpless she is, asking for help afterward. If plainly asking for things from them doesn't work, she'll take the opportunity to trick them and subdue them with magic, either having Aesie beat them up for angering her and/or taking the chance to steal their things and leave. The truth is that she's perfectly well-off, but she loves taking what isn't hers and feeling like she's better than everyone else.

It's easy to upset Hiemalis, and once you do it's hard to regain her favor. Indignancy comes naturally to her and she'll refuse to believe that she's to blame for any inconveniences she faces even when presented with overwhelming evidence to the contrary. She insists that she's perfect and wonderful and everyone else is just mean, annoying, or not trying hard enough. The truth is that she's actually rather self-conscious and never really recovered from the trauma of being rejected by her family despite her magical power. As such, she overcompensates externally and tries her best to ignore others pointing out her flaws; she believes if she has any flaws, no matter how small, her parents were right and she's worthless. But if she can make herself and everyone else believe she's perfect... then that'll prove that her family members were just ignorant fools!

Needless to say, she has trouble forming emotional bonds with people. Even if it wasn't for her personality, she's still far more introverted and private than her sister. Aesie is the only person she's close to, since Aesie will go out of her way to defend Hiemalis even when Hiemalis is clearly in the wrong. Though she would never earnestly, emotionally admit it, Hiemalis really does love Aesie and appreciate everything that she does... but emotion is weakness! Love is weakness! The only relationship any two beings should have is that of master and subject! So, she still takes advantage of Aesie by making her do things for her, stealing her kills and pretending like it was an accident, and persuading Aesie to help her in ways that are inconvenient to Aesie. She's careful to approve of her work and reward her with things every now and then, not convinced that a familial bond will be enough to prevent Aesie from realizing she deserves better.

"Aesie, these people are being mean to me... you'll beat them up, won't you?"

Hiemalis was born into the Timoris family: a family of powerful and monstrous demons with a large amount of influence over their planet. High expectations were placed on her and her twin sister, Aesie, before they were even born. All of these expectations were promptly shattered upon their birth, where it was revealed that they were only sort of monstrous. As it turned out, their mother wasn't the most faithful and happened to have some illicit dealings with some manner of humanoid. It was quite the scandal, but neither Hiemalis nor her sister were around to witness it. Just as they grew old enough to understand it - and understanding anything was difficult seeing that they were hidden away from public view - they were dropped off far away to fend for themselves.

Despite only being teenagers at the time, Hiemalis and Aesie took their abandonment in stride and proved themselves perfectly capable of surviving in Hell together. Though more human than their family, they were still plenty powerful and had a craving for trouble. They wreaked havoc across the world both for fun and profit, completely losing track of where they were and not caring in the slightest. Hiemalis was a powerful magician and Aesie was the perfect, obedient meat shield - as long as Hiemalis stood behind Aesie, she'd be unstoppable!

The two wound up stumbling into a branch of Hell that was connected the the labyrinth of Hell College. Subsequently the two wound up inside of Hell College proper, causing mischief freely for a while before anyone realized that they weren't even students. Eager to show their family how wrong they were to underestimate them for their "tainted" heritage, Hiemalis and Aesie both signed up as students!

Aesie is the brawns and Hiemalis is the brains. In addition to being intelligent and crafty, Hiemalis is also a talented magician. She's versed in a variety of illusion and distortion magics, as well as the magic of animation and telekinesis. She can pick up just about anything if she can get her claws on a tome, which is a major reason she's so interested in Hell College.

Like Aesie, Hiemalis has claws and horns that she can use in a pinch, but... it's not really her thing. Getting all sweaty and torn up? Gross! Also she's kind of physically weak, but you won't hear her saying that out loud.

As an envy demon, Hiemalis gets soul energy via denying others what they desire. This fits well with her habit of stealing in all sorts of manners, from literal thievery to stealing people's kills in video games.