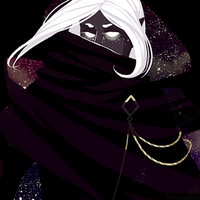 Agender (he/him, though any pronouns are fine honestly)

March 4th is what the kids he hung around picked out for him.

He's 6,957,000 km in diameter, but generally tends to hang around 7'0" or so. Abnormally tall, but still very small for someone like him. He can change size at will, though!

Crowds, flashing lights, people who seem angry, unintentionally scaring people, when people bring harm to living beings, papercuts, when your gaming device of choice runs out of charge before you get the chance to save, thunderstorms (though he's getting used to them), cramped rooms, loneliness, feeling purposeless.

Adhil is curious but cautious. He loves to learn and discover new places and new beings, but despite his majestic appearance he's kind of shy and easily intimidated. He's very afraid of large crowds and it's not hard to overstimulate him, so be careful with your cosmic pal!

Adhil is very quiet, calm, and gentle. He's reasonable and willing to listen to all opinions, mostly because opinions and interacting with other beings are kind of new to him. He doesn't know how to mediate or lead and is afraid of being put into situations where he must.

Having been essentially been raised by children, his solutions to things tend to be creative but simplistic. He often doesn't understand the deeper meanings behind things or grasp complex situations that keep a solution to a problem from being obvious. However, this has also made him very open-minded and caring. It's also led to him caring a lot about creative pursuits and kid's media... he knows a lot about cartoons and video games.

Adhil is in fact the star Adhil, or Xi Andromedae if you prefer. More specifically, he's the avatar of it: he's an abstract amalgamation of all of the wishes that have ever been made on him. He slowly came to exist in the heart of Xi Andromedae before eventually gaining consciousness, lost and confused as all new star avatars are. He wormed his way out into space, where he proceeded to drift about in search of a purpose.

He explored the cosmos for countless years, landing on every planet, every moon, every star, every celestial body possible in search of meaning. Alas, everywhere he went, he found nothing: no life, just empty landscapes that, though beautiful, couldn't satisfy him.

Eventually he discovered a large planet unlike one he had ever seen. Even from far above the atmosphere (ah! it had an atmosphere!) he could tell it was bustling with life! He enthusiastically dove into it like a shooting star across the sky, crash landing in an extremely visible and public area full of people. His odd appearance combined with the fact that he just fell out of the sky drew plenty of attention. Those who didn't eagerly crowd around him fled for their lives. 911 calls were made, all sorts of new people began to show up on the scene... Adhil was immediately overwhelmed. This was his very first time meeting other life in the universe, and he was being exposed to quite a bit of it at once. Rveryone kept speaking to him, making motions at him, pointing flashing things at him, and he understood absolutely none of it. Every time he tried to move everyone gasped or screamed, and he couldn't really tell what either noise meant. He tried to touch one of them and they passed out in fear, much to the terror of the rest of the crowd. It didn't take long for the government to take control of the situation, evacuating the area and cautiously taking Adhil into custody.

The longer Adhil spent on the planet, the more he felt he understood. He could tell that the beings on this planet seemed frightened of him, so he tried his best to be cooperative and calm. He couldn't understand their language, but he tried his hardest to learn it and figure out how to communicate without words as well. He wasn't sure what was happening, but the beings - humans, he learned - seemed to be just as curious about him as he was about them. Though he was honestly very intimidated and scared himself, he tried his best to answer their questions. They wanted to know what he was, where he came from, if there were others like him, if others were coming, what his intent was in coming to the planet, so on and so forth. They were simultaneously baffled and relieved by his nomadic and utterly innocent nature; he knew little more about himself than the humans did, really.

Though he wasn't aware of it, Adhil was causing quite the tizzy on the planet. His arrival had been excruciatingly public: in addition to his arrival being accidentally broadcasted live on national television due to him landing where a popular news program was reporting, he was recorded by hundreds of people on their phones. The government couldn't possibly keep Adhil's existence a secret: he quickly became an Internet phenomenon and was discussed on every TV channel. Internet campaigns were organized to free him; they had no idea what the government was doing with him, but the population demanded that even aliens get rights. They were going to get that weird space dude a lawyer!!

And, well, they actually wound up succeeding. Adhil suddenly had legal representation and had his hand held through all sorts of paperwork and court shenanigans, all the while attempting to deal with being exposed to the media again and trying to cooperate with officials who wanted to know exactly what he was. He became increasingly overstimulated by all of the attention and fled one day (unwittingly dragging along his lawyer), trying to find somewhere quiet where he could think and get used to the planet at his own pace.

It didn't take long for the two to be located, leading to Adhil being surrounded with as many people as ever. This was the straw that broke the camel's back, causing Adhil to start tearing reality asunder in the local area out of panic. His lawyer managed to convince everyone that Adhil desperately needed space before too much damage was done, which created an opening for him to escape once more - this time alone.

As the public increasingly demanded that Adhil be left to his own devices - a particularly hot subject on social media - Adhil found himself in a small town in the middle of nowhere. He took up residence in a treehouse, where he quickly became the guarded secret of an excited group of children. A small group of tiny, non-demanding humans was considerably less intimidating than massive, questioning crowds, so Adhil warily accepted their company. The kids, thrilled to have their own cool alien thing, started bringing him things like food, toys, games, and books. They'd teach him everything they learned at school and make him do their homework with them. You know, for his own learning! Adhil didn't have an issue with that: he was very eager to learn about this planet and obtain all of the knowledge he needed to not be so afraid of it anymore.

As the kids grew up he grew up with them, learning alongside them and developing interests as they did. Before long he could mostly communicate like a normal human and had at least an elementary school education. As the kids started getting phones and tablets they brought those to him as well, and he began to learn about both society and how people felt about him through the Internet. The kids couldn't keep his existence a secret, however, and eventually the town discovered Adhil was living there. Instead of running him out of town or hounding him with questions, they mostly accepted him as one of their own and did their best to keep him protected from the scores of people attracted to the town in hopes of gaining an audience with him. They generally succeeded, allowing Adhil to live relatively comfortably as he became the town's guardian angel.

A few years later Adhil received an invitation to a place called Heaven College out of thin air. Though intimidated by the idea of going to another strange place, the invitation seemed to imply it was full of all sorts of different beings. If that was the case it was unlikely that they'd all crowd around him... plus, he did still want to find more life in the universe, and everyone around him encouraged him to go through with it. Even his lawyer advised that it would be a good idea. Then when he came back he could tell everyone about the new beings he met, which would shift focus from him to these new, exciting creatures! Though certainly still nervous, Adhil felt encouraged and curious enough to accept the invitation and departed for Heaven College.

Adhil has space-themed powers. He can control cool little stars and moons, alter gravity, create miniature black holes, so on and so forth. He spends most of his time floating and is completely unaffected by things like temperature, pressure, and atmospheric content. He doesn't need to eat, breathe, sleep, etc. He does seem to have some human traits, though: he can bleed to death, though his blood looks like space and just floats there in the air. The entire inside of his body is just space with a star for a heart. It's pretty rad.

He seems to have some reality-warping capabilities, but aside from very minor things (such as shifting his size) they only manifest when he's sufficiently upset or afraid.