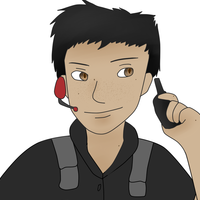 George works as a security guard at Wells Laboratories (LTD). He has a good eye for things and always points out what's going on.

He has a cool set of red headphones and he is a good, loyal worker to Francis. He always carefully monitors the cameras that are set up in every room. Francis wouldn't trust anyone else other than George.

George... Is a morally ambiguous person. He took on this job because he got good pay and he has to support his younger siblings.
However he has no qualms about this job and he is a very loyal worker. He doesn't care what happens, as long as he gets paid and he gets to go home to his siblings. He's a very good big brother.
He has his reasons: Elle has terrible health and Harlen is too young to work properly. If you want something done right, you do it yourself.

George literally does not care about what goes on in the laboratories. He doesn't care if this is legal or not. He's just here to observe, make sure no intruders get in, and when they get in he will get them. He's a loyal worker - He can't let anyone infiltrate him.

He's also very good with technology, so he's in charge of setting up with CCTVs and the hidden cameras.

He can be a very sarcastic and cynical person, often passing remarks. He doesn't really care as long as he gets to go home and take care of Elle and Harlen.
If something happened to them, well....

We don't need to think about that. That won't happen. Definitely not.

- George's favourite book is 1984
- Francis and George somewhat see each other as equals. Francis has a weird amount of respect for him because he's the only security guard who hasn't... disappeared on him.
- George likes Dory! .... And Dory likes him. There's some crushing happening there, but they're not sure if it'll ever work out.
- Apparently, lots of people trust George and think he has a friendly face and will help them. He's not about that life.
- George.... Just does not care. He has a job to do and he will only do that job. He will record things, edit them and send them off and he will just sit back and observe.
- He collects pennies

George is the type of guy to sit back listening to a podcast, maybe thinking about what to have for dinner, just watching in vague amusement as something very very illegal happens. He's just like that.