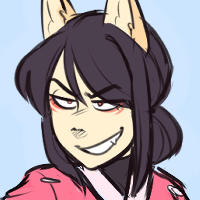 A kumiho is a type of nine-tailed fox that originates from Korean mythology. They are said to just be really old 1000-year-old foxes who have essentially grown into a demon. The older and wiser a fox gets the more tails they will grow. Kumiho's are known to transform into beautiful women to seduce people and steal their chi. It's said that if a human were to see a kumiho in their fox form then they will disappear or become engulfed in flames. The best way to catch a kumiho is to get one drunk in which they will lose control and revert back to their fox form.

On that note, Ploy is an alcoholic prostitute that has fire-based abilities. She may act sly but she can lose her temper easily and isn't the brightest of the bunch. Ploy is mischievous, impulsive, and irresponsible but is the leader of her ragtag group The Eastern Clan. The Eastern Clan is a group of 4 eastern mythological creatures dedicated to claiming territory and eating humans, specifically from the group The Western Brigade. Ploy used to have 5 tails but Chang, a Chinese dragon from The Guardians, tore off one of her tails after she ate his wife (for the 3rd time). Her goal in life is to get her revenge on Chang, eat humans, and have sex (only out of necessity).