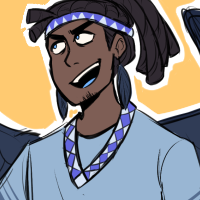 An Impundulu, also known as a Lightning Bird, is a mythical bird originating from South Africa.
They are immortal servants thought to be passed down by witches from generation to generation.
Impundulus cannot be cut up, poisoned, or drowned. Their only weakness is fire. It's said
Impundulus enjoy transforming into a young attractive man to flirt and seduce with all the local women.
They have vampiric characteristics will eat other birds and humans. When they are in their bird form they
will eat other birds and eat other humans in their human form. An Impundulu is associated with
evil and is thus widely feared in many tribes.

Luan may act sinister and mischievous but it's only an act he puts on. Luan is a sensitive guy
that seeks validation from his team and his witch. He likes to flirt with other girls as he yearns
affection from others. He serves a witch doctor that used to be part of the Xhosa tribe but was kicked
out due to her potions failing to heal a sick person. He feels great sorrow for his witch and
wishes to help her more but there's nothing he can do but protect her. She became cold and
distant towards him ever since that incident. Unfortunately for Luan, he is deeply in love
with her but never acts on it out of shame as he is but a mere familiar. Due to his loneliness, Luan
joins a group called the Western Brigade, a small group dedicated to hunting humans for food
and claiming territory from other opposing groups.