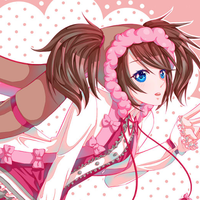 About
"I’ll stay up for only a few more minutes and then go to sleep, I promise!"

Cierra is an overly cheerful and talkative person who gets confused easily. People think of her as a very open person, but she actually keeps to herself on most personal topics. Most of her time is spent reading mangas, playing games, doodling, and watching Korean dramas. She has a younger sister, Mia, who is mute and Cierra cherishes her deeply. Their parents decided to make the sisters enroll in a magical high school where Cierra goes by the name Chocolate Bunny and Mia goes by Techno Cat as "wizard titles."

Cierra is 5'6" / 173 cm tall and has a pretty average body size, but has decently thicker than average thighs. She has extremely curly brown hair along with blue eyes. Her clothes consist of cutesy things such as frills and bows.

Mia Cierra is Mia's older sister. The two get along fairly well and most of their arguments are caused simply by the fact they live together and have to deal with each other every single day. They depend on each other heavily for support.