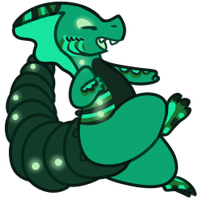 carrier, "the strong one", living table

Malachite is dragging his cuddling stone (a malachite, of course) everywhere.
And when I say everywhere, I mean everywhere.
It's logical, if you think about it. His name, his appearance, his interests,... everything is connected with malachites.
Holding one in his own hands should be pretty damn awesome.
And losing it would be his nightmare. So of course he'll hold it tightly for the rest of his life.
But don't worry, the stone itself isn't that heavy; He can hold it with only one arm.
So he's still able to grab stuff. And in a worst case scenario he could carry it with his legs or tuck it between his chin and chest (that would probably look hilarious)

Malachite is around 80 cm high.
He's a bit paranoid as he fears to lose his malachite.