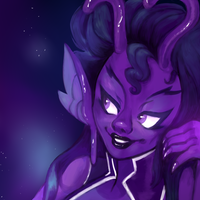 goo alien Of the Outer Reaches

As Counsellor of Navigation, Ji'esala is essentially captain the ship.

Yes, the captain the ship that's stuck in the same orbit for years due to the parameters of the mission. She succumbed to a horrible depression when it was decided that Humanity was not ready - politically, psychologically - for first contact. As such, may of her remaining official duties duties were taken on by Peyde - as well as most of the lower-grade staff she would have supervised. Officially, what remains is the ships's bridge crew, as well as the high-grade maintenance staff.

While she was treated for this depression, she is still recovering from it by the time Alice is brought on the ship. It's believed she goes by "Matrice" sometimes as a coping mechanism, as she has no trouble being called by her actual name.

Ji'esala seems to be a frequent participant in Niren and Kohalji's "Music" scene. She really wishes she could be the Star Trek captain that could beam down (no, the slime aliens can't beam thing like that) and fraternize.  As a gifted conversationalist that can lead you far away from whatever you wanted to talk about - well, you may see why the wider exposure would have done her good.

It takes Alice several encounters to find out Ji'esala actually does.