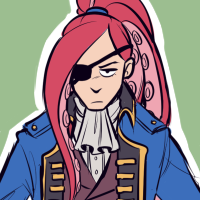 A Kraken is essentially a colossal octopus or squid from the Norway and Greenland region. They are
very prevalent in the tales of sailors who say that a Kraken could take down an entire ship into the ocean.
Krakens don't have any mystical or unique abilities like other mythical creatures, they're
just giant nordic squids...

Sia's main source of food is not humans but it is definitely her favorite. Unfortunately. when she lived in the seas she
barely saw any sailors or tourists sail near her. She couldn't get ahold of any humans as easily as she could
back before they weren't aware of her existence. Sia was always envious of the other creatures who had the
ability to turn into humanoids because finding food was so easy for them. One day when she was
swimming near a deserted island she met a witch on vacation who offered to give Sia a potion that granted her
the ability to switch into a monster and humanoid at will. Sia took the potion without hesitation and was finally
able to become a human, now she could commit all the manslaughter she wanted! After that, she
murdered some pirates and stole their clothing to blend in. She started to explore the world with her newfound ability
joyfully seeing the sights and landscapes. That is until she met Ploy in Europe. They got into a huge argument
about what monsters could be in that area and what couldn't. Sia and Ploy had a battle with Ploy ultimately losing.
Since then, Ploy has sworn vengeance on Sia saying that she's going to form a team of monsters to take her down.
Feeling threatened, Sia went out to seek her own team of monsters she dubbed the Western Brigade.
With Sia as their leader the Western Brigade vow to take down any monster that stands in their way.

Drawing Tips!
- She is actually muscular underneath to make up for the lack of powers.
- She can extend her tentacles to great lengths.
- She's pretty stoic and apathetic about most situations and isn't that bright...
- Has a masculine body type