It has taken Fang longer to grow up than some, but the wiles of the world have made sure to thrust him firmly into adulthood. For too long he had lingered on the cusp between boyhood and manhood, torn between teenager angst and childish antics, reveling in the bliss that is afforded to those who are naïve. In the years that have passed since leaving his childhood home, he has experienced enough injustice and heartache to mature, his eyes finally opened to the shadows that have always surrounded him.
He knows loss, and he knows pain, and he tells himself that he has learned from it.
Still, there might be some of The Boy left in his heart.
Typically bounding with energy, it is not unusual for Fang to brighten the attitudes of those around him. He knows the world’s shadows, but they have yet to smother the light of his laughter or the brightness of his grin. It is not out of character for him to act like a goofball to give someone a smile if they need it. His heart is huge and warm to those he cares about. His intentions are good, despite any mistakes his pride or brashness might blind him to, and he will go beyond the ends of the Earth in his efforts to keep a loved one free from harm.
He does not offend easily, but he will harbor an iron grudge should someone hurt those he cares for. Similarly, his temper is not stoked without effort, but should his anger flare, then there is no telling how far his fury will rage. He does not forget.

Trivia
Sorcery
PLANT CONTROL
Fang is a master of his plant sorcery. Able to create a plant at will, he can control its movement and growth, even having the skill to to prompt a plant to rise from the soil and “walk.” Nature is both a defense and support for him. There is no part of a plant that is out of his control: from the seeds of a fruit to the pollen of a flower, they are a part of him. Communication is second-nature now—they are his eyes and ears where he can’t be, and they are drawn to share their secrets with him. The plants he controls are imbued with strength from his sorcery, and are stronger than they normally would be. While Fang prefers peace, he will not hesitate to harness the power of nature as his weapon, and what a mighty weapon it is.
HEALING
Blessed by Vasanta in a time of uncertainty, Fang was blessed with the ability to heal. With practice, his secondary sorcery is able to separate from his first. No longer does his healing require plants in order to work—with serious concentration, he is able to mend moderate wounds without them, though he must physically be touching the person he intends to heal. That being said, his second magic is still stronger when aided by his first. He can imbue a plant or salve with properties able to heal large gashes or mend broken bones, while his ability to heal with physical touch alone is limited to shallow flesh injuries. Healing with plants also takes less concentration, although he is still prone to side effects if he pushes himself too far.
History

the beginning...
Fang was born as Fhuier Morfhang, to a mother and father in a community that was heavily centered around war and violence. It was a primitive and savage society, with little regard for religion, magic, or modernization—brute strength and battle prowess defined everything and everyone.
From the time he was a young boy, Fang’s parents could tell that something was different with their son. It quickly became obvious that he was softer than the rest of them, less violent, and not as physically destructive. Ashamed of this, his parents desperately tried to mold him into the barbaric character that their community required—he was exposed to and inflicted by terrible, violent things. Still, Fang’s heart would not harden.
So with the promise of manhood on the horizon, his parents fabricated a ruse in order to be rid of him: a “quest for manhood.”
Unaware of this trick and eager to be accepted by the only family he knew, Fang departed eagerly on this wild adventure.

in Caeleste...
His travels soon led him to Caeleste. He stumbled through its Passage—the labyrinth of trails and the dark boughs of the trees made him dizzy, until he finally found himself staggering into the world beyond. The first person he would encounter was a beautiful little mare named Arrabella. The two hit it off from the start: her a delicate, quiet girl and him a boisterous, affectionate boy. They complimented each other well. From there, Fang travelled all over this new place, exploring the strange lands and making a plethora of new friends. Eventually he found his way to Arrabella again, and decided to join her in her home of Blue Sage Meadows. Curiosity led him to the shrine of the kingdom’s patron deity, Vasanta, to ask for his first taste of magic. He received it in the form of plant sorcery.
Time passed as Fang acquainted himself more with Caeleste; he learned about its lore, practiced his newfound magic, and grew closer to Arrabella. One night, while huddled together in an inn during a blizzard, they confessed their love to each other. They were happy, and Fang was happy in Blue Sage Meadows. He had never been religious before, but the more he learned about and came to know Vasanta, the more he respected and revered Her. He was promoted to the kingdom’s Second in Command for a time, and then became the head of the militia as its General. Equipped with battle experience from his childhood, he was the sword and shield for Vasanta’s peaceable people. He protected them throughout a number of leaderships, including the reign of Andromeda, his best friend. Fang slowly grew from boy to man, his eyes opened to the primitive ways of his homeland and his parent’s cruel tricks.
His life was perfect, but perfection is fragile, as he would learn.
Arrabella was kidnapped one night, stolen away while he slept. Fang was distraught, angry, and riddled with shame—he should have been able to protect her. He searched everywhere he could, until his pursuit ultimately led him out of Caeleste, fearing she had been taken far, far away. Months passed before he returned again, weary and alone.
Fang was clinging to his last thread of hope when he found her at last—Arrabella, his love. He wept with joy, thinking he had finally discovered peace again. He ran to embrace her, but Arrabella would not have him. Instead, she scorned him for leaving Caeleste at all, for taking so long to find her, and for not being there when she had needed him. Twisting a knife deep into his heart with her words, she revealed that she had found someone else. While he had been consumed every waking moment in his search for her, she had already moved on.
Heartbroken and lost, he crawled to Vasanta’s shrine. There the Goddess comforted him, held him, and cried with him. She blessed him with a companion: Adira, a kitsune pup. Although he was still haunted and in pain, Fang was able to find new purpose in caring for Adira. This was how he met Requiem. In the same way he had first hit it off with Arrabella, he hit it off with Requiem. The two were kindred spirits, and bonded quickly. Day by day, Fang began to heal from his heartache, but it still wasn’t enough. He ended up leaving Caeleste for a time, taking advantage of the solitude to recover and escape the memories that kept old wounds open.
When he returned, it would be with a wash of shame to swallow him. In his absence, a tyrant had taken over Blue Sage Meadows—this barbarian had enslaved Vasanta’s people, and burned their home to ashes. In an effort to keep the land he loved safe, Fang offered himself up as Emperor. Vasanta accepted, and he suddenly found himself shouldering responsibilities that he did not take lightly. He served and protected them as their leader, and Blue Sage Meadows thrived as a result. His home was a sanctuary once again. Fang was able to reconnect with old friends, make new ones, and he finally mastered his plant magic, as well as practice a second in the art of healing. He found Requiem again, who had fled from Blue Sage Meadows in the aftermath of the tyrant’s reign. They lived separately now, but their friendship flourished; he grew to care for her.
All seemed perfect—but perfection, he now knew, was fragile.
It began with a werewolf attack. The beast had invaded his kingdom, tore through his defenses, and ripped (quite literally) through his people. The stench of blood permeated the air, his ears were filled with the sound of screams—this was Fang’s final image of the world before the werewolf ended him. Ended his life. He was still choking on the memory of his blood when he was resurrected. Waking, he saw Vasanta standing there to save them, Her grace had breathed life back into his lungs. She warned that the werewolf’s terrible attack wasn’t the end, that there was still a darkness lurking around them.
He would wonder later if even Vasanta knew then what exactly was to come.
How horrid it was.
The darkness flooded into Caeleste. It stole the life of anything it could reach, and left nothing but ashes and shadows in its wake. With the darkness came monsters—the Terrors, those creatures that hunted them in the night. Fang did not want to abandon his home and Vasanta, but the gods were dying; he knew that in order to survive, he would have to leave. It was with a heart full of despair that he sought out Requiem. He ushered them both away to safety, fleeing from the ruins of the only home he had ever come to love as his own.

in Novus...
He ran until he could run no more, until the monsters stopped hunting and everything around him had morphed into a place entirely unfamiliar. With Adira torn from his side and separated from Requiem, Fang cautiously explored this new world alone. It was strange—he had forgotten what it was like to not live in constant fear. Welcomed generously by his new friend Caelum, he quickly found a place in Novus’ Night Court. He could have thrived there, but his heart was still weighted with the loss of his friend and his beloved companion.
Haunted by the memories of when Arrabella had been kidnapped, Fang ultimately left Novus behind, searching again with only an aching heart to guide him.

in Mythos...
This story is being written. 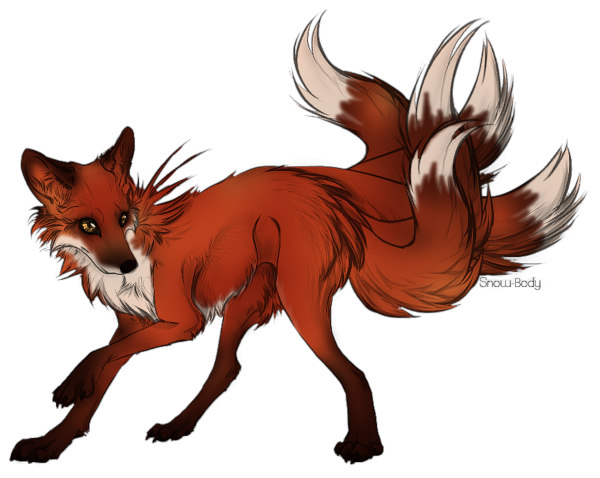 ADIRA, female red fox kitsune
Adira was born the oldest of three pups in her litter, within a small den in Blue Sage Meadows of Caeleste. She knew little of the world, aside from the comfort of her parents and the warmth of her siblings, and was happy for it. Unfortunately, the little family could not escape the violent rains that ravaged Caeleste; in the midst of a particularly fierce storm, their cozy den was flooded. Adira’s life was spared by the grace of the Spring Goddess, Vasanta. The Goddess gifted her well being to Fang, thus tying their souls and fates together. Adira is protective of her bonded, judgemental where he is not, but dotes on those who have earned her affection.

Fire Magic; Adira was born with the magical ability of fire control. These powers manifest as fiery cords that erupt from the length of each of her tails, spiraling along each appendage, and are generally used as whip-like weapons in the face of danger.
Highlights