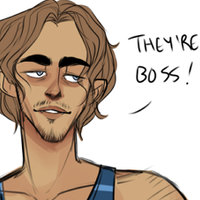 Immortal (probably in his 70s-80s at this point)

a werewolf who never let go of the 60s and doesn't wanna. here's a chill surfer dude who just wants to catch waves and have a good time. he also turns into a giant werewolf under the full moon, but it doesn't really bother him at all. he likes wearing tiny beach shorts.

he thinks its called being a "werewoof" or "woofman" and nobody's ever corrected him.

originally from Cali and has the accent to match.