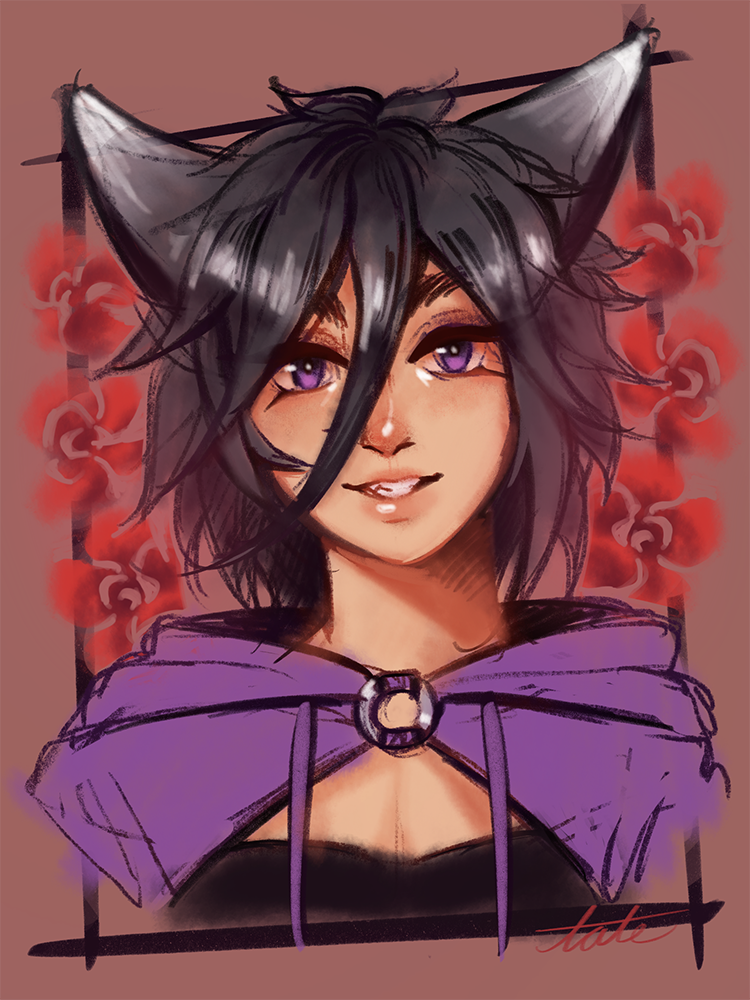 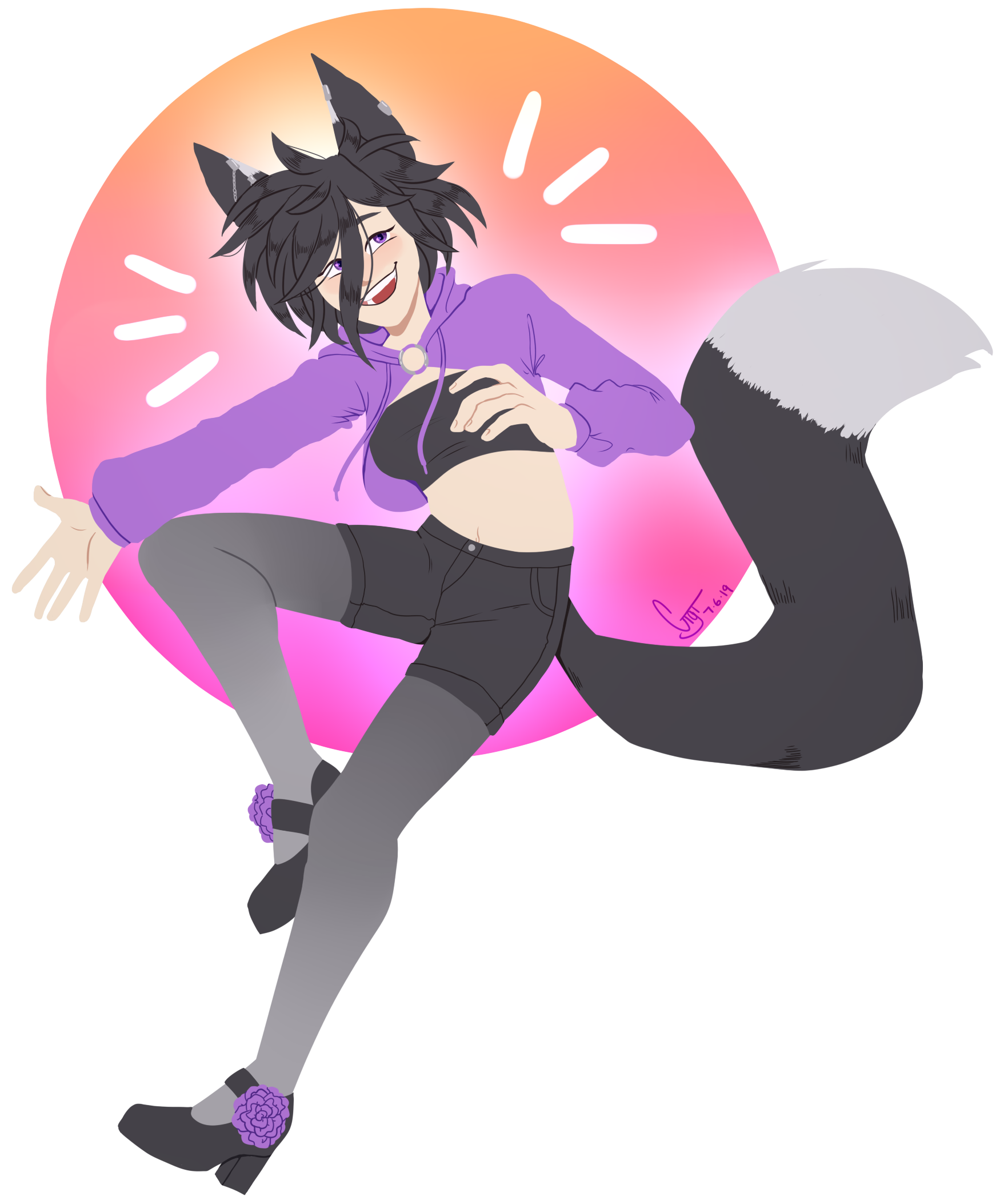 Cat is a very social, outgoing and friendly woman. She's the kind of person to compliment and talk to random strangers and always has something to talk about. She will tell you tons of weird or funny stories and always manages to lift up your mood or make you laugh. She practically knows half the town by now (due to her jobs and personality) and somehow manages to remember everyone's name and face, as well as little things about their lives.
She is very calm and good natured and has the strong urge to help everyone she meets. She's the kind of friend that doesn't know how to achieve her own life goals but sure af tries her best to help everyone else out; even when she's busy with her own life. She does, however, struggle with giving advice. But that won't stop her from listening to your problems (if that makes you feel better). She doesn't seem to sleep much, between her two jobs and private life, but she somehow manages to be wide awake most of the time, anyway.
She also loves to party and dance with her friends but doesn't enjoy very loud music or getting sloppy drunk. She is not the most responsible person, but will look out for her friends when they're drunk (and she WILL stop them from overdoing it... if she notices them drinking too much). She has no problem with crowded places and is most comfortable in the company of other people.

- hanging out in the cafe
- hanging out with her friends
- playing games with her friends (cards, uno, mario kart, smash bros, ...)
- talking to all kinds of people
- dancing (really enjoys zumba as a work out, too!)
- occasionally goes to the gym for yoga classes
- likes to watch overly dramatic soap operas in her downtime
- likes to play video games occasionally, but mostly nintendo games (like splatoon)

- Very talkative person, genuinely interested in the life of others
- optimistic, full of life and full of love
- Befriends a lot of strangers
- has a great memory for faces, names and facts; also decent at logical thinking
- Doesn't like pretentious people who think they know EVERYTHING (or jerks)
- likes to think she's the master at flirting (but is also a huge dork most of the time)
=> tends to compliment people A LOT (her compliments are always genuine)
- tends to swoon over women and flirt with them, but WON'T GET THE HINT when one actually flirts with her ("Aww omg she just said she likes my dress, how sweet!")
- loves roses (giving her a bouquet of roses wILL MAKE HER TEAR UP WITH HAPPY TEARS) => bonus points if they are purple!
- is not the best at giving advice, but will listen to your problem and comfort you
- can turn into a black fox and likes to curl up in her friends lap (=> only does that when she trusts you A LOT! likes to do this with Daniel cuz he likes petting her fox-form and it tends to calm him down rlly well when he's upset but doesnt want to talk about it... will also cuddle with him in her humanoid form)
- she's just... a big fan of physical affection in general; will cuddle with friends, hugs them a lot, tends to throw her arms around people's waist or shoulder while talking, etc.
- has a big sister kinda vibe (and WILL protecc her friendos like one)
- doesn't drink alcohol/do drugs because the feeling of not being in complete control of her actions terrifies her (but doesn't mind others around her drinking)

Relationships to other Characters

Daniel = best friend, no one truly understands why (besides those two themselves), they bonded over their respective shitty pasts and the trauma that resulted in it. She'd kill for him, probably. She loves him dearly. She tends to tease him about his crushes, but not in a mean way. She supports him and tries to get him to go outside more often and get to know more people.
Mary = good friend, the one to ask for advice
Antonio = adores him so so much, definitely wants him to be Daniel's next boyfriend because it's just so obvious that those two would be a great fit
Felicia = FUTURE girlfriend, beautiful being too good for this world, loves her very much, makes her dissolve into a puddle sometimes because Felicia is just too pretty and cute and wonderful for Cat to handle
Anthony = hates him with a burning passion, thinks he's a rich and arrogant asshole (because of his apathic nature and missing interest in the well-being of other people)
Bubblegum = acquaintance, tells her some gossip sometimes, but doesn't approve of her general personality or acts of violence
Irene = acquaintances, Cat brings her food sometimes, Irene knows Cats secret (found out by pure chance but promised to keep it in exchange for something and information)
Felizitas and Melody = help her, they know half of the truth

Has ear-piercings(but doesn't always wear them), likes elegant but simple/modern clothes, loves dresses but also jeans and tops, has a hidden tattoo (roses) and hidden piercings

- Given up for adoption right after birth; got seperated from her twin brother
- Adopted by a woman who was a kind mom to her
- Had a very nice childhood full of good memories and friends
- aND THEN her mother died very suddenly
- She had a hard time getting over that, her grades dropped and she didn't end up going to College because she didn't feel like she could do that anymore after those years
- Started to work in the Café, later in the bar as well
- Met Daniel (and tons of other people, she's got a lot of acquaintances) => more on Daniel's profile (in the tabs)
- Daniel and her were roomates for a while
- helps Daniel sobering up and introduces him and Mary to each other. => Daniel moves out to be Mary's roommate, so that Cat (with her one-bedroom apartment) can actually invite women back to her apartment (Daniel did not want to be in the way of Cat's dating life and felt like a burden, even though Cat would never view him as such)
- Cat lives alone in her apartment again, but she lives very close by, so she often visits Daniel and Mary at their place