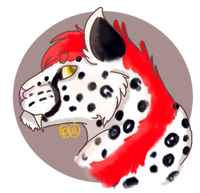 Whiteleopard is almost completely based off me (Cpt. Cheshire Kasper). He is also my oldest character to date, having been created in 2012 and as of writing this, hasn't been roleplayed in pver 6 years (my bad).

Whiteleopard is a large snow leopard/ domestic feline hybrid. He has large snow leopard markings covering his body and also has black cheetah spots covering his body as well. He has very distinctive front and back markings which are red. He has red ears and paws, as well as a small marking above his nose that is also red. He has two large sabre teeth and has yellow to golden eyes.

Whiteleopard was my first ever roleplaying character. His Creation date is the 8th of August 2012. Over the years many changes have been made to his design.