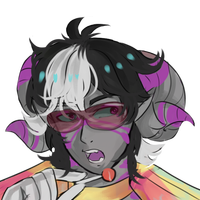 Carakante, or just Cara, might have the looks of a rough and tumble go getter but he's actually a very sweet Warpa. He was born in Gluttony, but when he was only a few weeks old his parents were forced to follow his grandfather into the Violence region to become stronger. Well, the man managed to get himself killed for his troubles along with most of the family he forced into bringing, but his parents survived and tried to raise him as best as they could in the region of Violence, but they could only take so much. Once he fed on his first nightmare and he took a humanoid form, they marked him and sent him on his way, wanting him to take care of himself and save himself rather than rely on his parents that were stressed from fighting for their lives. For a while, he was confused and hurt, so he followed them secretly until he saw their lives taken while trying to help a starving demon child, only to be killed by cannibalistic raiders. He was heavily traumatized by the incident and fled, fending for himself from then on.

Cara eked out a miserable existence, usually on the verge of starvation since he didn't know how to find nightmares well, and fought for his life whenever he could resulting in a broken mentality, one where he couldn't trust anyone. And yet, he somehow retained his kindness as he gathered hordes of food just to give to anyone starving, partially in hopes that they would not hurt him and partially because he didn't want to see anyone starving like he was. For this, he gained a lot of Impling followers and people started seeing him as...something good. Not an angel because they were disgusting beings but something sorta like it. Not understanding it, he just lived, trying to find out his reason for living in Violence.

He eventually met a Warpa who talked about the lands of Gluttony and how it was so fertile that it beat the living hell out of living in Violence. That...stirred something inside him. Gluttony sounded familiar, why did it? Wanting to learn more, he asked the Warpa and was given directions on how to reach that promised land. He packed what little he had and fled, fighting through the Claw to get to his destination. His Implings following, with only a few surviving and leaving him to mourn, he followed the trail south, circling around until he reached Gluttony. Heresy, Wrath, Greed, interesting places, but he wanted to go home. And when he finally arrived in the fertile lands, he cried, knowing that he was home at last.

Carakante currently works in Gluttony as his own "restaurant," just a simple little stall where he sells all sorts of food that he can cook up with whatever ingredients he can find. He can thank his Implings for finding trash and such and bringing them to him, and he also uses it to study, though he doesn't eat any himself because he can't stomach it. He's basically an odds and ends worker and works a modest living, not living luxuriously but able to scrape enough to give himself an alright living. He doesn't need much, having lived in Violence, so using the stall as a roof over his head was enough and is his home.

Cara usually befriends creatures better than other humanoid species, considering that it was humanoid species who were the most violent in his former home. He's still sweet and kind, willing to give out food for free to those that look to need a good eating, which is actually quite rare in Gluttony for humanoids but not for Implings, but he's very distrustful of people and isn't willing to talk unless either as a nightmare form or if he eventually gets to know people. He has learned social skills from selling from his stall, but he's quite shy and scared when interacting out of business, thinking people are out to get him. He's very jumpy as a result and almost throws punches whenever he is startled, though he holds his fist just long enough to see the other person isn't a threat and apologize quietly before asking them what they want. Despite this paranoia, he tries to be helpful and can do odd jobs every here and now, wanting others to succeed where his own life had failed in his words. He doesn't have a positive self image of himself, viewing himself as a murdering monster due to living in Violence and killing other demons just to survive, and he's not usually cheerful unless around his friends, but he's more than ready to to give himself up if it means helping others. His kindness knows no bounds and he'll do anything for his friends, as long as he gets to live too of course. Still, he can have a temper, don't make him mad by saying a hurtful thing or he will sucker punch in the gut. He loves sucker punching. God yeah sucker punching. But yeah. Never. EVER. Waste food in front of him. He will literally try to eviscerate with everything he got, it's terrible and a sin, god he hates it when people waste food when others are starving. He saw a lot of starving people, some dying in his hands, he rather not. And though he doesn't look like it, he is devout...but for the wrong kind of thing. He likes God actually, but cannot voice it as a demon. Worshipping Satan...well, yes, that evil, whatever. He thinks Satan could be a good friend. ...But he prefers to worship God. That ideal of love...he prefers that more than anything. Just that love...he wants it more than he lets on...

Cara is actually currently dating someone, a Greed War Paint Demon by the name of Olivia. They met through his business and he was able to get to know her somewhat before she left the area, though before she left she gave him various gifts to maintain contact with her. He's fine with a long distance relationship, honestly, and he loves talking with her online and giving her a phone call once every few days when they can, he's just...not sure what to make of the feeling of love in his chest. Such a strange feeling, and yet...she's really cute. Maybe one day he'll know her for what she really is, but until then he will remain by her side. And maybe in the future too...