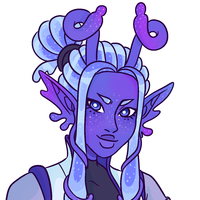 As pretty much anyone can operate on a goo alien with little consequence, negative or very rarely positive, medicine has focused much more on biological vectors than human medicine historically has. It's also more "experience first" oriented - the role of nurse is a doctor's apprentice, the roll of Doctor is bestowed - expected - given enough experience and published research.

The whole concept of a "Doctorate" - years of study before application - is not foreign concept, just their doctors don't do it. Really, "Apothecary" might be a better word. Or not.

Mohaluul moved to Calcaei to start her nursing residency slightly before she finished "growing up" - not illegal, strictly speaking - which on the Earth Expedition meant she was on of the few to be able to pull off lighter hair colors than skin colors. Her bedside manner veers towards brutal honesty - and efficacy - and away from comfort.

Not being a biologist, she contributed very little to the main thrust of the studies on the ship - not that this was expected. Rather, part of her work is documenting the effects of long term space missions & sterile environments on their species. Save for one paper on Psionic Vulcanization to Prolong the Feasibility of Golem-Type Mental Print Constructs, or however that translates.