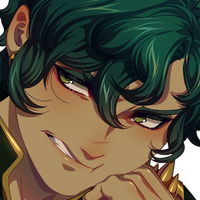 A seemingly normal residence of Rouennais, Clover falls within the House of Clubs. Most other Houses, aside from his own, treat him like a bizarre creature from the unknown.

Clover is quiet, and often respond with grunts or eyerolls towards higher Houses. From others, they might think Clover is as dense as a club, and although he's a little on the strong side he is definitely not an idiot.

Clover is hard to read: People can’t tell if they are liked by him, because in many situations he would never offer a hand and would turn his cheek when they get mugged. However, in other times he would also defend them at all cost – no questions asked. It’s always situational.

In conversation, he is known to be hissy and snappy much like a snake. He can be seen as apathetic where it would be expected to show empathy.

Metal Jacks
Metal Jacks, sharp as blades and sometimes seems to have a mind of their own. Perfect for long-range attacks as they can bounce great distance. The ball the comes with these jacks has a special property, when bounced it allows the jacks to change direction wherever Clover desires.

Clover is from House of Clubs, there in Rouennais, it is rare to see many club residences leave their district. The only exception to this were children attending school or hired individuals to work directly with the heart district – however always in small numbers. It’s known that club residence returns to their district once they complete high school, however with Clover he continued higher education and sticks out like a sore thumb.

Clover is a special kid with privilege, thanks to his family working closely with the red Queen. Although this is the case, the people surrounding him are none the wiser and believes that he was left an orphan at a young age. His mannerism and behavior as a child were even animalistic leaving some to believe he was raised by wolves. Despite having close ties with loyalty, he has lived a somewhat normal life.

He is well aware of the House position and the unfairness that has been placed, having the residence fall straight into labor after their education. It continues to leave a sour taste in Clover’s mouth, as well as a bitter attitude among the entire district – a common trait of the House. Clover over the course of his life question to himself about his parents, seemingly betraying their own House for another. 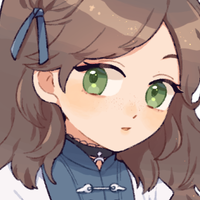 "Wow this girl is annoying as much as Daniella. She won't stop asking about my Jacks..." 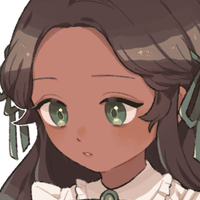 Clover met her in the forest stopping her from setting the place on fire. He isn't the best caretaker or even good with words, but after that day he does worry and slightly scared of this girl. 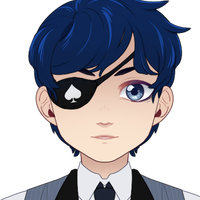 Spade drunkenly walks into the wrong district home after spending his money on gambling, and begged for a place to stay for the night. Of couse Clover said no and punched him in the face. That day forward Clover gets ammused when Spade gets beat up over something, they occassionally hang out.