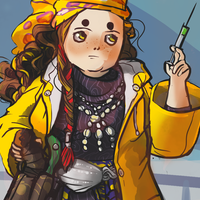 Velembi is a journeyman gene-splicer. She was born on the ship of Inazuma, a part of the drifting post-apocalyptic city of Sampo, as the younger sister of a repository-warden. Velembi herself was chosen for an apprenticeship in becoming a gene-splicer, causing a class divide to appear between the two siblings.

Velembis' childhood was spent exploring the ports. Over time the city of Sampo became too small to contain the girl and she grew restless, starting up all sorts of mischief. The thrill-seeking kept escalating, until - on a dare - she stole some seeds from The Repository with her friend Ray. However, Velembi slipped during the get-away and fell into the sea between the ships, very nearly drowning in the stormy waters if it hadn't been for her co-thief and the crew fishing her out. However, that slip-up caused them to get caught. Her friend was banished from the city and she only escaped that faith due to her mentor and sister speaking up on her behalf.

Her mentor got the girl a part in a mission to activate a piece of old world machinery on a distant island. For Velembi it's both a coming-of-age task as well as a way to redeem herself for the thievery. As they'd been sailing to their destination the ship was caught in an awful storm, with her mentor being claimed by the waves.

The starting point of the LARP is on a sailing ship on the open sea, in the aftermaths of the tragedy.

Aima [repository-warden] Velembis older sister. A no-nonsense, for the greater good type of persone. Velembi desires to impress her.

Sanchez [adventurer] A looter with many scars and trophies. She was picked up from the aftermaths of a shipwreck along with Ricky.

Sven [technician] Assigned to deal with any mechanisms we might encounter. Where did he come from, where does he go?

HTML by lowkeywicked | World, character concepts and photos © the makers of Pump Five LARP | Design and playing © me (Cliodna)