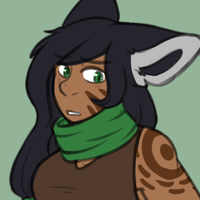 The circumstances of Adaliah's birth were unfortunate for her, as somewhere down her bloodline, it had been mixed with Snow Verneyi genes, causing her to be born with an interesting combination of white and black fur. Being born to the village of Etemmu on the planet Tanza was her first trial in life. This was the birthplace of Charcoal Verneyi, and being sworn enemies of the Snow Verneyi of the village Malakh, her white highlights caused her to stick out dramatically. However per village laws, these accident children were still to be treated as one of their own to preserve their teachings in the rare dark magics the village specialized in. Despite these laws they didn't have to treat her with any less doubt or contempt. She grew up under the strict watch and judgement of the village leaders, which she quickly learned she hated. She was always given the worst practice tasks and the most tedious chores, and while she didn't do poorly at her Dark Magic lessons, it was obvious the other students were excelling faster and further than she was. This grew her stubbornness to prove her elders that she shouldn't be looked down upon and she would always try harder, recklessly pushing herself frequently to the point of exhaustion to keep up with and surpass other students. She had hoped that this would get some form of praise, but it simply earned her a lecture on how she shouldn't have to push this hard to be at her level and that continuing on her current path she would exhaust herself into an early grave.

Adaliah was prone to bouts of short-sightedness in her decisions. She often acted on pure emotion and cleaned up the messes caused by her emotional outbursts later. However one of these outbursts cost her everything... She had a particularly difficult day of doubt and misjudgment from village elders stacking on every little thing that they could pin on her, that she had finally had enough and wanted to show them that she was fully capable of mastering their arts. There was a summoning exercise scheduled that afternoon and she would gladly put her all into it despite elders warning against that very thing...

And that she did, summoning a monstrous being not unlike a demon, called a Nox, that nearly devoured her before being chased off. She was met with more scorn than she had ever faced as her terrible wounds were treated and dressed, She was questioned vehemently about what in the world she was thinking and how she could possibly have the ability to summon such a powerful being with her previous track record of struggling to keep up with others in her class. The conclusion came quickly that she would be banished that night, as she had put the entire village in danger, not only from the summoning itself, but the demon was still out there, and it would come back for her, and if anyone should suffer for that it should be her alone.

She continued to curse the village, and herself as she left. She didn't expect to survive the night with her wounds, which those thoughts were quickly backed up when she found herself pursued by wolves that had no doubt just smelled the blood.  Before she knew it, she had been rescued... or so she thought for a second before she was slammed and pinned to the ground by the very Nox that had nearly killed her earlier that day, but instead of finishing the job, he seemed baffled and demanded answers, which she promptly gave, figuring this was the end of the line anyway, she may as well make it easier on herself. She noted as she spoke, she was regaining some strength back, and the pain from her wounds was growing duller, but maybe it was the freezing air, or the fact that he was perhaps slightly crushing her rib cage and she was getting a bit light headed and nothing was quite making sense anymore. Especially when he suddenly offered her a deal, a promise of power and protection as long as she stayed with him. She could continue her studies under his teaching and she wouldn't answer to village leaders anymore. She didn't trust the situation in the slightest, but her other options were freezing to death or being eaten by wolves, so the choice was obvious.

It was an odd relationship. A summoner having to be taken care of by a Nox she had no control over. Despite the generous offer he had granted her, he did not show her what she would call kindness, as he was forceful and threatening with the very way he moved, and much moreso with the way he spoke. She learned he went by Baron Zahar, and would test waters by calling him anything else, her foolish defiance peeking through even in the face of a creature such as this that had already proven he could tear her apart... But he did not. She continued to question silently why he wanted to keep her around and give her everything for, what seemed to her, nothing in return. The question continued to prod at the back of her mind as the days passed and her wounds healed into scars faster than she would have expected, and her ability to wield her magics seemed to come more naturally to her and she grew herself growing closer to this Baron by the day.