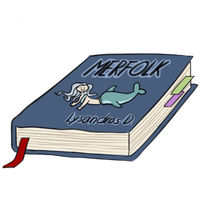 A great white shark mer from Shoal Curruid near the coast of the Fjords.

The merfolk, or simply mer, are an intelligent, humanoid species that live in the world ocean. They bear a striking resemblance to the fabled mermaid or merman, with a humanoid upper body and a fish-like lower body. Mer vary wildly in size, depending on what particular species make up their "lower half." As a result of their wide range of morphologies, they can be found in a variety of habitats throughout the oceans, ranging from the light-filled epipelagic zones to the deep ocean. Mer are carnivores, but some will occasionally eat algae.

Mer are highly social, forming familial groups called shoals that are similar to the pods of dolphins or whales. They have well-established social behaviors and norms, as well as methods of vocal and non-vocal communication.

Aside from rumors and speculation, mer are unknown to the world at large. However, they are well aware of land-dwelling humans and the changes that humans have been causing in the oceans. Many mer have had, or know of someone who has been negatively affected by human activity in the oceans.

Mer have a large range of body types and sizes, which are defined by their mix. A mix is a term used to refer to what "species" make up their lower body. The size of a mer is defined by their specific mix – for example, an orca mer will typically range from 16-26 feet, while a blue marlin mer will will range from 10-14 feet. However, there does appear to be a lower limit on the sizes of mer, usually around 6 feet. Why this minimum exists is unknown.

A mer's upper body is remarkably similar to that of a human's, though they have both gills and lungs. This dual respiratory system allows them to breathe above and below water, much like amphibians. Mer hands also end in sharp claws, giving them a distinct advantage in grasping and catching fish.

Mer can be found all throughout the oceans and in some seas. They inhabit many different ocean biomes, though most live in the photic zone. Historically, mer could also be found in rivers and lakes, but human encroachment has forced them to relocate to larger bodies of water.

Many warmblood mer will migrate between two or more locations throughout the year, while many coldblood mer will remain stationary in set territories year-round. Migration patterns stay the same for each shoal - once a route has been established, it is passed down from one shoal leader to the next. Territories are also retained between generations of shoal leaders, though parts of the territory may be stolen by other shoals if the shoal leader is not strong enough to defend their space. Several shoals, usually ones sharing a common ancestry, can share the same territory without conflict, provided there are enough resources to sustain them all. The borders of a shoal's territory are marked by their shoal sigil.

Total population counts are impossible to determine. Seeing as they share a similar niche to many high trophic level carnivores, it can be estimated that they make up a low percentage of the total biomass of their ecosystems.

The shoal sigil of Shoal Circadia.

Mer live in pseudo-familial units called shoals. Shoals are similar to dolphin or orca pods and comprise of the shoal leader, their mate(s) (shoalmates), and their children (shoalings). Each shoal has its own sigil/symbol that can be displayed on accessories/clothing or used to mark territory.

Dialects exist in mer communication and can be used to determine the general location of a mer's home shoal.

Mer attractiveness is measured in two ways – by their fish-hunting ability and their pattern. How important these two traits are depends on the individual doing the judging and the individual being judged.

Fishing ability: Strong fishers are highly attractive, as that means they can provide a steady source of food for their mates and children. This trait matters more for potential/current shoal leaders than someone looking to become a shoalmate.

Courtship is usually initiated when the “fisher” brings a potential mate gifts of fish and rare trinkets, such as a pearl or an old pocketwatch from a shipwreck. Interested mates will reciprocate with a trinket of their own. Nonmigrating shoals will often have a space to display all their trinkets, while migrating shoals will incorporate their trinkets into their accessories.

Upon successfully courting a mate, two mer will "announce" their new status to all shoals in an area via low-frequency, long-distance calls.

Tensions between warmbloods and coldbloods

Estimates of the composition of an average mer's diet.

Warmblood mer are generally apex predators, like their mixes. They're known for being able to catch vasts amounts of fish due to their high metabolic rates and nonreliance on favorable ambient ocean temperatures, and as such eat a diet of almost exclusively large fish. Coldblood mer are also carnivores, but will happily consume smaller fish or easy-to-obtain non-fish meats like clams or birds.

Due to their high intelligence and capacity to strategize, some mer will also hunt sea mammals and other large predators. Large mammals and predators are high risk, high reward targets - catching one is the equivalent of catching dozens of fish, but a mer risks injury during the hunt. Such hunts are generally only attempted by older, larger, and more experienced mer.

On average, mer can live to be around 70-80 years old, though some mixes, such as the greenland shark mer, can live substantially longer. Male and female mer reach sexual maturity somewhere between the ages of 12-15, but are forbidden from taking mates or mating until they are considered adults by their shoal. Fertility in mer lasts for 20-30 years, after which neither males nor females can produce any viable gametes.

Mer spawn during the spring and fall seasons. Due to the variation in size between different mixes, mating in mer resembles that of fishes, rather than humans. Female mer will produce one or two large eggs and release them into the water, which will then be fertilized by a male's sperm.

Mer do have sex recreationally, but it's rarely penetrative sex, unless the two mer are of similar sizes. As a result, most mer have some form of oral sex with their mates.

A shoaling from Shoal Circadia.

Once an egg is fertilized, it is watched over carefully by the mother. She carries it with her wherever she goes and does not stray far from the shoal in the 12 months it takes for the egg to hatch. During the development period, the mother is always accompanied by one of her mates. Every single member of the shoal is required to spend time around the egg, as the egg's transparency allows the developing shoaling to watch its surroundings and imprint on its family members.

Newborn shoalings enter the world with the rudimentary knowledge of the world around them. They can identify every member of their shoal and know a few things about the area that they inhabit. While they are born knowing how to swim and move their limbs, complex communications and other life skills must be taught to them. All members of the shoal particiate in caring for the shoaling.

Young shoalings are fed a diet of semi-digested food until they are 1.5-2 years old, after which they begin to eat raw meat.

Most mer's views on humans (dry-landers, in their terms) and humanity are neutral at best and negative at worst.

Many mer have been personally affected or know of someone who's been affected by human activity in the oceans; common incidents include the destruction of home territories and run-ins with boat propellers. Even isolated shoals can feel the negative impacts of human activity through changing ocean patterns, decreased fish availability, and degredation of the ocean environment.

However, despite their grievances, mer do not make any effort to approach humans. The death of large, intelligent sea mammals like whales and orcas at the hands of humans are well-ingrained in their cultural history, and many fear the possibility of death, or even worse, entrapment, should they ever encounter a human. Occasionally, brave or mischievous mer will mess with human-placed items in the ocean. It is not uncommon for mer to steal fish from nets or baits, push buoys out of position, or destroy equipment.

Despite merkind's fears of humans, one curious piece of folklore remains - the selkie. The selkie, as defined by the mer, is a rare mer-born individual who has the power to transform into a dry-lander the moment they leave the water. They are, in a way, almost deified for their mastery of both land and sea. Though few, if any, mer have personally seen a selkie, they are absolutely convinced that selkies exist. Selkies appear to be the only "human" thing that the mer truly trust.

As humans are unaware of the existence of mer, the only thing that can be done to help them would be a complete overhaul of laws and regulations regarding the oceans.