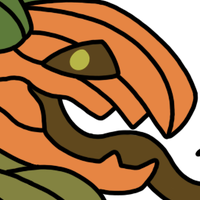 Pytor, Pytor,
Pumpkin Eater,
Had a wife,
Until they ate her

Used to be a canine of some sort, once. Before they turned. They don't really remember how it happened, or why. That's assuming there even was a reason, beyond mere misfortune.

Inactive during the day, they rise as the moon does, bounding through fields and causing havoc destroying crops. Especially pumpkin patches. Local farmers have taken to stringing up wards and casting charms, but who knows if that really works. Suspicious folk have dubbed them 'The Pumpkin Eater', though what they actually eat is a mystery.

Wouldn't advise approaching if you like your fingers. Or are partially made of pumpkin.