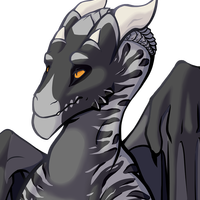 A bit lanky for an Ertakar but still solid, mostly in the shoulders and upper chest, as one might correlate with a 'swimmer's form, standing at a tall 8'7". Coloration is a dark gray with lighter gray almost boa-like striping which follow the entirety of the body.

As a human form, which e rarely takes, the build is lanky and similarly balanced in muscle structure. E has dark skin, long black hair and the same orange eyes.

First impression is that e might seem shy or even asocial, however that's hardly the case. E cares a lot about substance and value of interaction, and therefore, only prefer to interact when it is needed. E finds idle chatter a bit tiring, and prefer to simply not talk with another unless it hold some sort of 'purpose' to en.

Free time is preferred to be spent on any 'productive' matters, such as personal research, intelligence gathering, and discussions that can be attributed to an exchange of information or ideas. E values abstract ideas as much as e values hard factual concepts. It's not so much that e is a workaholic, it's more that e associates es research and intellectual matters as es recreation.

E are rarely emotive, not because e does not understand emotion, it's just not a thing e does. Esurda is also not unaware of sarcasm or social nuances, and often intentionally and consciously respond literally to sarcastic remarks for the sake of confusion or frustration. Es most emotive state is when in a state of intellectual prowess, but this can often amount to smugness and self importance.

Because of Esurda's very consistent, stalwart demeanor, e tends to be the most stable of the group. This makes en less prone to berserker breaks, but this also makes en less effective soldiers in comparison to the rest of the crew. E is not defenseless nor is e weak, but e won't plow through enemies in the same manner Jesuret or Neijah would be able to. But this attribute is also why Esurda is the commander of the unit, as e is one of the few that can keep a level head and pull out the unit if