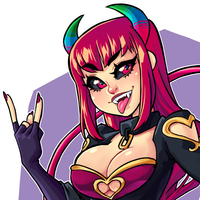 'This reckless, abhorrent, intolerable beast should not be welcome in Omnia.'
~ Lux.

Overview
Impulsive - Creative - Irrational
Tensei is an uncontrollable Immortal with an overwhelming control over space. Constant exposure to different people, worlds and environments mean they never really stay the same for very long and have developed a multitude of attitudes that swap and change frequently. The three constants in their personality are their impulsive nature, creativity and constant showboating. They have little regard for the consequences of their actions and choose to act in the moment rather than considering the future. They leave that to their sister, Megami.
Tensei's abilities allow them to control space, meaning they can create things from nothing, open wormholes between two places and essentially do anything they can think of. Most commonly they create weapons, use magic and open wormholes, which can be opened between any two places they can access. Their favourite weapon is a doublade, which they often use sheathed so it's more like a big stick.
Notoriously, Tensei is stricken with horrible luck and often finds themself in sticky situations. Their wit often gets them back to safety, but can also cause bigger problems. Although they don't like to admit it, Tensei works best in a team and makes a pretty good leader under pressure.

Personality
Whilst being uncontrollable and impulsive pretty much defines them, Tensei is quick-witted and loves a good joke, often throwing puns around and trying to get a laugh. They're fun company but can be very overwhelming to people that aren't used to them. They don't tend to take a lot seriously and make light of any situation. They'll take on jobs begrudgingly unless there's a clear reward or it's something they actually want to do. Honestly they'd rather just do nothing and take things at their own pace, but that's not the will of Fate or Valkyrie.
Tensei's horrible luck is mostly caused by Valkyrie, despite their positive relationship. He thinks it's fun to cause their misfortune, even though they despise it and constantly ask him to stop. He says it's because they took on Shin's argumentative side, a point they argue. Although they often beg for better luck Valkyrie sort of 'feeds' off their misfortune, and will continue pestering them until it finds another worthy target.
Tensei has a huge weak spot for girls and a promiscuous nature, which often leads to them being distracted when a particuarly attractive girl enters the room. They're particuarly fond of Kyrei and Aria, however the latter wants no part in Tensei's shenanigans. It's not often Tensei leaves a party alone and they're likely to stay in touch with the ones they like. Some find it's an honour, others consider it immoral.
Tensei's general demeanour has earned them the number one spot on a lot of hit lists, but people close to them will often say they're reliable when it comes to getting a job done. Although they have their own way of doing things they're loyal to those they care about. Tenebris is quite fond of this mannerism and believes Tensei will one day grow to learn what their actions really do, and how to control themself more appropriately.

Background
After splitting from Shin, Tensei took her space-based abilities and the part of her that argued and questioned everything. This was received negatively by a lot of people, since they're considered the part of Shin that corrupted. At first they were confused, quiet and lost but over time became reckless, unpredictable and uncontrollable. They took up work as an infiltrator, living as a mortal for a lifetime and gathering information on how that race lives. Tensei's constant exposure to different universes and living as different mortals has caused rifts in their personality, so they've changed personalities multiple times after living different lives. People that know them are used to the change, but those that don't see them often are usually confused by their constant changes.
Inheriting Shin's space powers means Tensei has complete control over the Realm of Space, and can do whatever they want within that realm. They're heavily supervised and regulated by The Continuum, who believes they don't deserve the power they inherited and use it recklessly. As a result it honours Megami and gives her whatever she wants, but only if it knows Tensei will find out. It tries to fuel their jealous nature but Tensei's used to Megami being the 'favourite'. However, it knows it can't remove Tensei without sacrificing Megami and is influenced by Ilker to make Tensei a better person. It often gives them advice to try and lessen the damage they cause on a daily basis, but Tensei insists the fights break out because people attack them without provocation. While this is true, Tensei doesn't help is deescalating any issues. Ilker sees this, but The Continuum refuses to and finds it's easier to just blame Tensei.
Tensei's main job involves infiltrating mortal universes and gathering data for Megami's research. As part of a 'legit experience' Tensei's memories are removed and they start life as a newly born baby. They live out a normal life and return to Omnia once their time is up. In recent times their job has been jeopardised by people looking for a quick and easy way to get rid of them, but Megami's always on the lookout for danger and has Hye at her side. The two look after Tensei, even if they don't appreciate the backlash.
The AU versions of Tensei are mortal lives they've lived, which often changes their personality after they leave and alter their overall knowledge. Although Tensei will visit the Anima and have these memories removed, they store important ones and any new skills they learn while they were alive. Although their personality will differ, they always seem to follow a similar path in their lives. It's not uncommon for Tensei to enter with a friend and encounter them as a mortal for a bit of fun, but they usually go in alone and trust Megami and Hye to keep them safe.

Trivia
~ 'Tensei' means 'reincarnation', referring to them being the Space Incarnate.
~The name came from the game series 'Shin Megami Tensei', and shares the same origin with their sister Megami and original body Shin.
~ They never really talk about it, but they've got a huge weakness for redheads.
~Tensei is modelled after me, and is an accentuation of what I see are my main traits: creative, witty and animated.
~Their favourite instruments are the keytar and electric guitar.
~They rarely unsheathe their Doublade and have no particular reason for preferring the big stick.