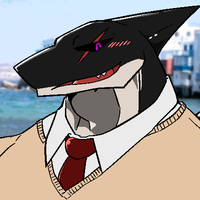 A shark-man who looks intimidating and cruel, but in truth is actually very nice and friendly! Sure, he's eaten some flesh before, done a couple murders, devoured some souls, but that's just normal cultural stuff for him! All that aside he helps little old ladies across the street, pets dogs, helps out anyone who's lost, volunteers at the soup kitchen, and donates to the less fortunate. He's overall a stand-up guy, and if not for said cultural brutality one would have to wonder why he wound up at Hell College of all places.

Chaurus is a bundle of contradictions. He looks intimidating, but he's a real sweetheart. He's got a gentle soul and loves to help people, always coming to the aid of the weak and needy. He stands up for the innocent and less fortunate, willing to put his life on the line to defend those he sees as worthy of protection. He's selfless and gives his time up to help others, using his spare time to work on improving himself so he can be even better at bringing joy and safety to others.

And then he chomps a passerby. He might be nice, but he also happens to come from a culture where it's perfectly acceptable to feed when, where, and on whoever you'd like. That's just the law of the ocean! Furthermore, might is important to exert. It's a good way of protecting your tribe! Death and murder aren't anything to get too upset about, because that's just the cycle of nature. Their energy will be put to someone else's use, so it's not like it's a waste of life or anything!

It's best to be friendly with Chaurus so he remembers you, basically. He wouldn't chomp someone he cared about, haha. Unless...?

Shark traits aside, Chaurus works out and eats right, leaving him with a body that's impressive even for his species. He can bench press pretty much anything you point him at and then some. Despite this, he's wound up choosing the career of a healer, and he's very good at it. His focus on the healing arts hasn't dulled his muscles or instincts a bit, though, so enemies would do well not to make assumptions about his capabilities based on his class.

From birth Chaurus was involved in the Abyssal Church, a cult of underwater species who worship the abyssal god [WIP] Belau. He was pleased with his lot in life, always enjoying spreading the word and taking part in the community. He became a pillar of his community despite the darkness one would assume hangs over such a cult, being particularly popular with children and the elderly. He ensured everyone felt they had a place and upheld the laws of the land. As in, no littering or swearing! But eating each other is ok.

One day Chaurus received an invitation to Hell College. Interested in furthering his career and feeling the Abyssal Church could stand on its own even better than it could before, he accepted. He further bolstered his faith while he was there and became more proficient in healing and support magic. Not satisfied with just learning, though, he fought to become Student Body President. Literally. It's a prestigious position, and he knew he had to have it to better his peers! Sure enough, once he had control over the student body he made efforts to protect weaker students to allow them to grow into strong demons, often personally helping them out and showing them around.

It was through this work that he met Poe Blackwood: a research subject turned student who was clearly in need of a helping hand. He got Poe all set up with his classes, dorm, so on and so forth, frequently checking in on him to make sure he was doing okay. They spent so much time with each other that one thing led to the next and, well... they wound up dating! Before long Lureus Ailswen came into Poe's life and they became a triad, working together as an unbreakable team and managing to push through the brutal final exam to graduate.

After graduation, Chaurus and Lureus both chose to sell their souls to Ignis, the professor Poe worked as a TA for. It seemed like a natural career choice to Chaurus and he feels fulfilled by his experience so far, though he can't fully comprehend why Poe won't join them when he's already practically an Infernal as-is.