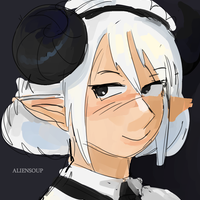 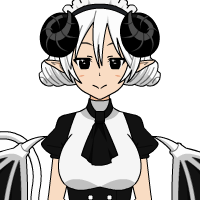 The loyal servant of Hell College's Dark Chancellor, Asena. While her maid outfit and perpetual smile make her seem more of a janitor than Asena's right hand, those who make assumptions will soon come to regret them. Pleris is immensely powerful, capable of felling even Underkings should she attempt to, being one of the most powerful beings in all of Entirety without even any divinity or reality-bending to form her strength.

Despite her sheer potential she seems content being Asena's lowly maid, spending her days performing mundane tasks in Asena's personal domain like cooking and cleaning. It may be for the best, as whenever she's out and about she can't help but ramble on and on about her unorthodox life philosophy: some sort of oddly beloved nihilism.

Pleris is an unorthodox character. She radiates an uncanny aura, what with her glimmering eyes and her quiet smile, but it's once she opens her mouth that you realize how right you were to be concerned. When she talks she tends to talk quite a bit, waxing poetic about how vastly inferior you are - how vastly inferior she is - to her lady, Her Unholiness. Insistent terminology, that. Even then she'll go on at length how even Asena - perhaps the most powerful being in all of Entirety, as the title of Dark Chancellor isn't one to take lightly - is nothing in the scheme of Entirety. Even gods die, infinity erases all things, power is an illusion... she finds existence meaningless, as all things change with time, all empires fall, new limits of power are achieved, and Entirety expands endlessly. No individual matters in the end, no matter how powerful they are. You do not matter. She does not matter. No matter how long one may live, Entirety will forget them in the end and all their works will fade.

This all sounds rather depressing, but Pleris always sounds pleased to speak of her philosophy. Perhaps a bit too pleased, what with the blushing and the sparkle in her eyes. While it's easy to write her off as some sort of existential masochist, she simply seeks to educate and comfort others. Nothing matters, so there's no reason to stress. All pain and suffering will fade. All sins will be forgotten. No matter how massive the mistake, infinity will swallow it and leave nothing behind before long. No one can truly bring an end to all things or scar Entirety: it's simply impossible to ever be so significant, and those who believe existence has stake in them are endearingly naive. One should simply live as they please, for one's perspective is all that can truly matter to them, and it's a truly magical thing to have!

Despite freely talking about how even Asena is fallible, Pleris is nonetheless fiercely dedicated to her lady, Her Unholiness, and does not take slights to her lightly. She'll bow to any and all of Asena's demands, no matter how difficult, tediously, humiliating, or demeaningly mundane they are. She always does so with a smile and likely some manner of self-deprecating remark, making it unclear to the uninitiated how she feels about her lot in life, but as Pleris will assure you her loyalty is thorough and true.

Pleris is a formidable opponent right off the back, with her many years having given her ample opportunity to train in all sorts of martial arts, with all manner of weapons, and in all types of magic. She prefers to stick with her staples, though: dark magic, osteokinesis, and physical combat straight out of a DBZ fight, combining them for supreme versatility.

Should she see you as unworthy of her time, as a legitimate threat, or should she just want some entertainment, however, she'll break out her real claim to fame. Her signature ability is the manipulation of perception. Specifically, Pleris is capable of switching around people's senses with others', including her own and even the "senses" of inanimate objects, making it useful for both espionage and shutting down foes.

To better explain this ability, imagine you're in a party of adventurers venturing through the Hell College labyrinth. You make the mistake of walking into the Pleris superboss, and she just doesn't have the time to play today. You charge forward nonetheless. You're suddenly seeing through the healer's eyes, you feel the locomotion of the thief's legs, you feel the barbarian's grip on their axe, you feel the weight of the paladin's armor, you can taste the air in the bard's shuddering inhale, you feel the vibration of the mage's vocal chords, and you hear everyone's panicked shouting through Pleris' ears. God knows who has your senses, and you quickly lose track of how to move or act, feeling your sense of self dissipate throughout the crowd, throughout the environment. And, really, she's being merciful with this one.

Pleris knows how to get creative with this ability, and even if she's only against one person the brain gets confused when it thinks the left leg is the right arm. She hardly needs to think on it, though, as the simplest of perception swaps are enough to completely shut down any party. If a group knows about her abilities beforehand they can perhaps figure out how to coordinate through the mess, but the number of beings who have bested her in combat - at least after she breaks out her ultimate skill - is vastly fewer than the number of beings who have taken on all the Underkings to graduate from Hell College.

To put it simply, her place at Asena's side isn't just folly.

Long ago, Pleris was your typical early-Entirety demon. Filled with power, she sought to kill, conquer, and flaunt her strength. Her pride was far from unearned, as she could easily fell most opponents. So when she arrived at Hell College, she wasn't satisfied with simply defeating the Underkings and graduating. She sought something more, the ultimate trophy. She approached the Dark Chancellor, Asena, asking for a fight with each of them at their full power. Should Pleris win she would gain control over Hell College, having proved herself as the most powerful demon in all of existence, and Asena would serve her forevermore as proof of Pleris' superiority. If Asena were to win, however, Pleris would instead become her eternal servant, forced to accept that she was not the end-all be-all of strength. Asena, amused by Pleris' audacity and the severity of her offer, accepted. Pleris eagerly made the first strike, knowing that even if she somehow lost it wouldn't be until after a long and arduous fight that would go down in history.

Asena obliterated her in about one second.

Pleris' loss was... a revelation. At last Pleris had experienced true power. All of the blood she'd shed over the course of her life, all she had conquered, all who trembled before her... all of Pleris' accomplishments were moot when laid before Asena. She had been completely and utterly decimated, completely destroyed. She'd never even had the slightest chance. What was Asena, truly? And what did this make Pleris? What was her place in Entirety? Did she truly matter? No, she didn't. Pleris realized on that day how insignificant she truly was, how insignificant all things were.

And it fascinated her. She found herself enamored by her own meaningless nature. How pitiful she was... and yet, how wondrous the act of being pitiful was!

Since that day Pleris has dutifully served Asena as her personal servant, any incidents of apparent betrayal or subterfuge being simple acts of play to keep her lady, Her Unholiness, amused. She is at times seen about campus, her frilly maid outfit not keeping the wise from rightfully shuddering when she walks into the room. One can only hope she's appeared to pick something up, not someone...