Unfamiliar with the outer world’s society Zek does not know how to hold a casual conversation. He always answers questions in simplification. If he was not asked he does not listen to others' explanations nor explain himself. Growing up alongside the close ones he spent his whole life with, who always understood him, he never had to explain himself. He does not know what’s morally wrong or right. His cheerfulness jester covers his lunatic thoughts and mindset. He will be blunt and uncaring for others well being and tends to step on other boundaries. Although his pranks and tease are barbaric and brutal, his smile will make up for it, right?

Was he human, a clone, merely an experiment or a weapon made from the government? He is a machine made out of flesh, a man-made being. Zek might have been made from a human or other living beings, even his heartbeat is fake, but Zek does not belong in the world of the living but he also doesn't belong in the world of the dead. He is not a Machina like Jarona or Lykos, he is a clone. He is a replication of a human, but is and will never be human. Zek was made to be a weapon. Made by the government in the darkest depth, Zek was not raised to be an ordinary child. A demonic composite drawn from the nightmares that haunt every sentient mind, the thing known as Varkolak has become a known force of pure terror. It is chaotic in every aspect, a faceless shadow with cold eyes and haunting laughter. After freeing itself from the underground dungeon, Zek now slinks upon the waking world.

From a young age, Zek had been surviving on the urban streets like a shadow. But his life on the street ends soon after he meets Jarona and then Lykos. The children throw away their past, keep it locked deep in their minds, and start living with eachothers as family. Lykos had great goals, a mission to sabotage the government's hidden secret. For many, it was a dig into their own grave mission, but they were no ordinary people. Together they were unstoppable. Lykos was a great brother and leader, none could match his intelligence. Jarona had a hot temper, but always listened to Lykos and Zek, she was stronger than most adult soldiers while only at 12 years of age. It was clear that Zek was not a clever mind. Zek does not plan for his actions, he does not think before he strikes. His survival instinct is high, he always had his own way out in dangerous situations, whether it be manslaughter or silently disappearing into thin air.

The little family business then grows in a short span of time and has turned into a shadow army in a blink of an eye. Money was never a problem, in the large futuristic city like this, there's always some shady business floating around. People came willingly joining the team to help and to revenge for their own reasons. Although no one ever stays long enough to gain Zek's interest. For Zek none of them mattered. Only Jarona, Argis, and Lykos are his family, the only ones that were there from the beginning to his end, others are mere playmates. On the surface, Zek is a charming jester. A little overhyped but overall normal. Until you get to know him. Most would say that death isn't funny, but not Zek, for him it's hysterical. He jests until someone dies, and then he laughs. For those who hear a dark chuckle in the dead of night, Varkolak may have marked his next plaything.

Along with this growth, their reputation rose. A popular belief is that Zek is not of the surface of the earth, that he is a thing from a dark and twisted world. Still, others believe that he is the demonic presentation of humanity's dark urges and therefore cannot be reasoned with. The most plausible belief is that Zek is an assassin for hire, left to his own lunatic play until his services are needed. Zek certainly has proven himself to be a cunning individual, evading authorities at every turn who might seek him for questioning for some horrendous, law-breaking atrocity. It seems unimaginable that such a malevolent figure is allowed to remain to lurk in the shade. Although his action made him the infamous assassin, no one has caught him, his face was hidden and those who saw it, never made it out alive.

He always smiles and laughs, even when he is upset. (That's why he is quite difficult to read)

Talk to himself sometimes. 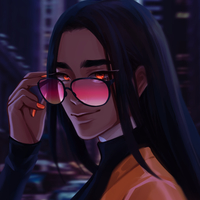