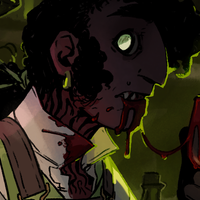 "What do you mean, 'we need an invitation?'"

Lou is, at first impression, quite a disarming combination of friendly and slightly awkward. This isn't even much of a fabrication. They're a little lacking in slick social aptitude, but obviously intelligent and passionate, and in fact it's quite easy to get them to geek out about clothing, gadgets, chemicals, or the opera.

Beyond the surprisingly representative façade, Lou harbors a dab hand at crime, near compulsive lying, a plethora of secrets, and a mild penchant for sadism. Some of that simply comes with the job, being a street orphan turned back alley doctor, cultist, and unauthorized locksmith.

Just about the only thing they're guaranteed to be fully genuine about is fashion and the art of tailoring.

On the shorter side and quite youthful in the face, Lou is pretty easy to mistake for a youngster who doesn't know a damn thing, and they count on that. Playing dumb and innocent is one of their greatest talents.

They tend to dress somewhat drably, favoring earth tones and green, and simpler attire over anything flashy. All of their clothing, though old and often handed down many times, is well kept and clean. A sharp eye might notice skillful mends and resizing.

Lou generally wears their collar high, partially concealing the network of root-like scarring covering their entire neck down to their shoulders. Ask them what it's from and they'll give a different answer every time.

Lou was born in the gutters of South Point, a large port city (think a cross between New Orleans and Paris) on the southern tip of the Akorosi mainland. They never knew their parents, most likely paupers themselves, who gave up their infant to whoever might take care of them. Lou's earliest memories are as a young child, living with a larger group of similar transient children, moving between shelters and homes.

A few years in, the Governor of the region put into action a 'social' program to turn street urchins into productive members of society. Lou, along with many other children, was snatched off the street by the royal police and sent to one of these 'boarding schools.' Here, they received a basic education and, in the other half of their week, worked in a textile mill producing clothing. From ages five through about twelve, this was Lou's life. The work was dangerous, and the teachers increasingly harsh and impatient. Towards the end, it became quite common for groups of children (or inmates, as many considered themselves) to break out. Before long, Lou followed.

Lou and their little pack of fellow escapees hopped on a train to Duskwall in the chilly north. There, the group scattered and mingled with the local urchin gangs. Lou, being small and not particularly good at fighting or thieving, quickly found themself unwanted as they grew older. For a few months, they resorted to begging and mostly unsuccessful larceny just to stay alive.

An old beggar - or what appeared to be - took notice of the starving kid. They never interacted much, but the vagrant always seemed to lurk around, occasionally providing Lou an easy opening for a meal, or ensuring a bigger urchin trips before they could get in a sucker punch. Eventually, this stinky guardian angel lured Lou into the haunted and crumbling Six Towers district and close to a strange costume shop in an otherwise lifeless street.

Perhaps just as intended, the desperate urchin couldn't resist attempting to snatch something shiny from the apparently deserted shop. Fetching a rock from the broken pavement, they made to smash a window and grab the sequined mask beyond, figuring it might fetch them a trade for something to eat. Instead, they found themself face to sneering mask with the shop's owner.

Aphotis dragged them into her lair before they could even scream, and threatened to eat them on the spot. She could do it, too, as they'd learn later. But she didn't. Despite her demeanor, Aphotis found herself quite taken with the plight of the orphan, and offered them a deal. Work for her, and they'd have all the food and shelter they need. Even pay, in suspiciously outdated silver coins.

Needless to say, Lou agreed on the spot, not seeing many other options. Unfortunately for them in the moment, Aphotis chose to seal the deal in a very permanent way. Peeling off her own white mask to reveal the glistening mass of red teeth behind, she placed the waxy thing on Lou's own face. Where it stuck fast. The mask bonded to Lou's flesh, growing and spreading over their features and under their skin, slowly taking on the color and appearance of their original face. The process wasn't exactly pleasant for them, and made firm their indenture.

For the next twelve years, Lou worked for the old creature, slowly learning more about her and growing accustomed to their strange new face. Their jobs mostly entailed working around the shop, tidying up, making new costumes and toys, and attending to the rare customer (or more likely, thief).

Occasionally, Aphotis would send Lou on an "errand" to fetch her something. Generally, these fetch-quests involved breaking into somewhere secure or infiltrating a group, and stealing something of varying apparent worth (they never learned what she did with these objects). She never offered Lou much guidance, and they had to learn the arts of lockpicking and stealth rather quickly, as well as learning to control the other interesting feature of their new face - disguise, as anyone they'd looked at long enough to form a clear memory of.

When not working, Lou filled their time studying the stacks of books littering the back of the shop, practicing their crafts, and cultivating an interest in alchemy and medicine after a particularly interesting 'errand' for their mistress.

When they were around 24 years old, Aphotis sent Lou on an unusually complex and dangerous mission, even going so far as to warn them. They'd be gone a long time, and would likely need to find help in order to retrieve their goal - and they received little other guidance, beyond a cryptic description of "the thorn that felled the horned god"

This is how Lou would find themself joined up with a small-time band of burglars operating out of a Silkshore nightclub basement.

Here, they'd somewhat accidentally grow close to the gang of thieves through their shared brushes with the law and death, even developing crushes on two of them. Lou's main story from here on deals with these developing relationships and the increasing conflict of interest with their mission. After betraying Dom in pursuit of their goal, and a near death experience at the hands of the Spirit Wardens, Lou would eventually turn their sights toward freeing themself of Aphotis's hold on them.