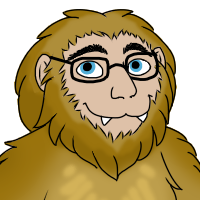 Vince was adopted by a couple of humans when he was just a few weeks old. Not much is known about where he came or who his biological parents are; all that is known about his origins is that he was found by the side of the road when he was just a baby. All his life, Vince grew up believing that he was a human- he just happened to have been born with abnormally large feet, compared to most other humans. Other kids used used to tease him for this by calling him names like "Bigfoot", and while he hated being teased, he eventually learned to take it in stride.

Once Vince hit puberty, he began to get very, very hairy- much more so than his peers. Before long, his entire body was covered in a thick coat of hair, more like that of an ape rather than a man. It was then that Vince realized that he wasn't a human at all- he was a sasquatch! Other people couldn't help but notice how much he looked like Bigfoot, and he drew large crowds of unwanted attention. It eventually got to the point where Vince couldn't take the publicity anymore, so he ran away to the nearby woods and found a hard-to-reach cave to hide inside. He rarely gets any human visitors now, and while he does miss the human family that he left behind, Vince is just relieved that he now has a place where he can live in peace without huge crowds swarming him.

However, Vince does not live alone. When he moved into the cave where he lives now, he met Vera, a yeti who had moved from the North Pole in order to live somewhere warmer. Vince and Vera became fast friends, and eventually, they fell in love and got married. They've been together for twelve years now, and have two kids: a ten-year-old daughter named Florence, and a ten-month-old baby named Gordon.