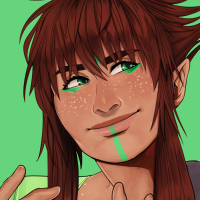 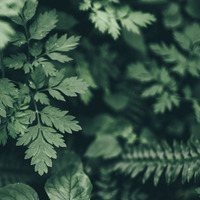 Her Forest form resembles her true state, and closely mimics a mix of Elk and Sika. Though she is female, she does have a set of antlers that don't drop. Her true state is much larger and has slight differences in markings. She possesses a human form outside of the Forest the majority of the time.

Her markings do not glow, but seem to stand out supernaturally against her fur. The fur around her neck is silky toward the front, and soft and feathery in the back, with two long forelocks that hang from her head. She binds them so that they do not fly into her face or otherwise bother her. Her pelt, in general, is more soft than coarse, especially around the parts with thicker patches of fur. She bears the classic Sika spots around her shoulders and flanks.

If she is angered to the brink of breaking the Gods' seal, she will grow fangs and her spurs and mane/tail fur will enlongate proportionately.

Her demonic powers besides her exceptional physical strength and speed are sealed away by the passive power of the Twin Gods. It's not uncommon for her to be subconsciously drawn to other demons, as she can often sense their idle power. Fire triggers a negative response in her, as does the Holy which damages her due to her demonic nature. A casting of the devout pelt could scorch her irreparably. She avoids the Twin Statues and the Drinkplaats for these reasons.

Her figure is deceiving; she's willowy but far from easy to push around. Faster than she is strong; swift on her feet. More apt to rely on her speed than pure strength in combat. Her antlers and hooves are sharpened to brutal points, albeit unintentionally. She must wear them down on occasion lest they get brittle at their ends. Able to tread without making a sound on the forest floor by virtue of her innate prowess, and she's talented at concealing her presence in the forest using similar methods.

Her saliva can be used as an emergency antiseptic, and she has a formidable amount of field training with herbal and holistic medicine. In the case that the Twin God's seal on her demonic powers are broken, plant life in her immediate vicinity may grow out of control in proportion to her emotion at the time. She can control this plant matter while the seal is gone but if it's put back into place, the accelerated growth will wither.

The endling daughter of a mountain daiyōkai named Reishin (or the Great Forest King) that was slain by humans clearing land. She is the last of her bloodline as the rest of her herd had long been slaughtered by other predatory demons, including her sire. Considered a demonic princess of the domain Reishin once ruled, though hardly cares to live up to the idea or image of royalty. Has lived a simple life since her father's death after a period of deep grief and disillusionment.

Unsure of how she came to the Forest but she doesn't seem to mind one way or another, though it seems to have been through a stable rip in reality that acts as a junction between her home woods and the Forest. This rip is in the same place in her home woods, but appears to be ever shifting in its place in the Endless. If it can be found, it can be entered by others in the Forest.

Tsubaki is a friendly individual, taking joy in the company of others or entertaining. Rarely enjoys being left alone but is used to solitude. Gentle to a fault, but her kindness shouldn't be mistaken for naiveté. A firm pacifist, she refuses to fight unless someone vulnerable is in a dire situation or she's pushed to her own limits by an attack. At that point, the seal on her demonic energy MAY be broken, revealing a true Yōkai worthy of her years and lineage. She fears little, brave and reckless in equal measure that nearly borders on arrogance.

Her unfortunate past has caused her to often hold people at arm's length, but she's strong-willed, and hopeful in return, open to the idea things can be different. Somewhat of a martyr in her worst moments. She adores children, very nuturing towards them if allowed to be. Often yearns for her own, but isn't interested in being a single parent like her father was. She's not shy, but she can occasionally be overly polite or formal with new individuals. Courteous. While she's slightly wary of human-faced creatures, she doesn't show any other biases with regards to prey or predator creatures. Though she is not promiscious, she's a sensual being, something compounded by several hundred years alone. Determined not to show a sad face if she can help it, and attempts to be welcoming to everyone.

Seldom feels the need to carry grudges, and doesn't allow her opinion on individuals to be swayed by others as she vastly prefers to make her own. A forgiving heart, but easily distances herself from those she feels hurt by. Heavily self-sufficient. A kinetic, tactile creature who prefers to keep her hands busy and her mind blank if she can.

Suffers a bit of learned helplessness, but quietly tries not to allow it to show. Draws her own conclusions and believes they tend to be correct without investigating the source many times, allowing whatever to happen to continue unless she is being actively harmed or wronged. Tries to assume the best of people, rarely contemptuous about these situations.