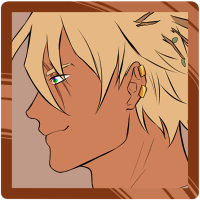 The clearly-inebriated blond man leaned toward an unfortunate-looking man who sat beside him at the bar. He grinned, and a muscular arm wrapped around the unfortunate's shoulders. "Hey... Hey, I'm—" He paused, then took another sip of his beer. "I'm Graham. Wossyer name?"

His very sober 'victim' grimaced at the reek of cheap beer on the other man's breath before he answered. "Robert."

"Robby!," Graham exclaimed, eyes bright. "Aha, oh man. Oh man, I gotta... Man, I just remembered this really funny story. You'll... You're gonna love it, man." He bobbed his head up and down, the movements exaggerated as he leaned his jacket-clad bulk further against Robert. "Y'wanna hear?"

"Not particularly." Robert sighed and shook his head.

"Aw!" The blond huffed and looked around, leaning back on his stool before he leaned forward and slammed his elbows onto the bar with a groan. "I'mma tell you anyways, just cuz yer sho..." He scowled at his slur, then continued. "Cuz yer so... so nice, Reba!"

The story Graham spun was filled with as many slurring syllables as it was with a complete lack of realism or point. He spoke of monster-hunters, uncreatively called Hunters, and how he was one and had a partner, and how he faked his death in a fight, then fled from his former masters. Graham spoke in terror of fae, and how he'd seen a little girl turned into a street lamp, talking with a blissful and deliriously lustful expression in infantile babbles. He said that the fae weren't winged and tiny pretty things, but monsters, and some looked pretty, and some were ugly, and both were horrifying, because they didn't have 'sensible morals'. He went on about how the fae were an infestation, that if he were just stronger, he'd be able to save humanity from them. The further he went, the more he drank, and the more unsteady and nonsensical his words became.

Robert just watched, barely listening to the man's drunken break-down as the giant started to cry. With a heavy sigh, he patted Graham's shoulder. "There, there," he murmured half-heartedly.

"I can't understand you." Robert chided, as though speaking to a child. He sipped at his own drink: whiskey on the rocks, then looked once more towards Graham. The larger man stared up at Robert, blood flowing freely from one nostril and down across his lips and chin. Robert paused, then lowered his glass and grabbed a couple napkins nearby. He wiped the other man's face, then stuffed the second napkin into the offending nostril. "You need some water, and to sleep this off. You're going to hurt yourself."

"Jussa... hab hour." Graham groaned, then scratched at the back of his head as he looked around. "Oh shid... Dassa... Dassa fay-ree... Innit? In... inna corner, wid... wid all da wimmins." He squinted into a dark corner, where Robert could see an older man surrounded by what looked like college girls.

"I still can't understand a word you're saying." Robert looked toward the bartender. "Water over here! I think this man's well past his limit!"

How can this man introduce himself as Graham Bishop? It's quite simple—he found a dead homeless man and stole not only his wallet, but its contents as well (along with his mustard-stained shirt). Included in the contents were the man's driver's license, a dead credit card, and a little bit of cash. He decided he liked the man's name, so took it for his own, and thus it is not a lie.

Like any fae being, Graham cannot knowingly lie. Similarly, he cannot bear the touch of iron—though cold iron is the worst; silver also causes him horrible burns on contact, due to his magical nature.

Alongside these weaknesses, he also draws strength and power from his heritage. As a Hunter, he has massive strength and incredible healing, plus has a warning system that causes nosebleeds in the presence of magical beings. As a fae, he has two types of magic he can use—time and suggestion. With suggestion, he can use his tone, cadence, and other vocal traits to convince humans of various things—this doesn't work on magical beings very well at all. His time magic is very unpredictable, unmastered, and powered entirely by his unconscious. Thankfully, it can only adjust time for him, though to his perception, it speeds or slows the rest of the world. He is unable and uninterested in trying to go back in time.

While his abilities say a lot about him, so too do his habits. After he accidentally faked his own death, he fled the city of Cork, Ireland and began to wander. During his wanderings, he often finds work out of the parking lots of various hardware or home project stores. He exchanges his work only for food or cash. After he's done with work for the day, he goes to whatever shitty bar he can find and drinks and eats until he's out of money—though only Pabst Blue Ribbon has any effect on his drunkenness.

On days where he's feeling particularly rowdy, he might start a brawl in fun, though he sometimes forgets that humans aren't as sturdy as he is.

When most people meet Graham, they find a dark-tanned and freckled man with a broad grin and broader shoulders. His muscles bulge against his over-pocketed duster, and his jeans stay up due to the thickness of his thighs moreso than from being buttoned—an oft-forgotten step in his dressing process. Despite his unbuttoned pants, he wears his heavy boots fully laced and tied, and cites when asked that he likes having all his toes, even if they can grow back. On the rare occasions when he wears a shirt, it is mustard-stained and often wrinkled from being kept in a jacket pocket.

As messy and unkempt as his outfit, he ties his waist-length hair with a simple thong, but otherwise leaves it wild. In the front, it is chopped roughly, just enough to keep out of his eyes. Hidden beneath a glamour, branches grow from his scalp. Similarly glamoured, he hides his true eyes—rainbow-hued and four-clover shaped with four pupils each—beneath plain brown irises.

Two slices over his left eye offer a hint of a brutal past, especially when Graham removes his coat to reveal a tapestry across his flesh, in all shapes and sizes and stages of healing. Even the palms of his hands and undersides of his fingers are scarred, left smooth by some deep burn in his history. Because of his past, he wears gold earrings, on the belief that should he die, the earrings could be used to pay for his funeral.

When this Hunter was born, he was named Ober by the doctor after his parents gratefully requested he name the child. The doctor, Alsoome by name, looked into the infant's soul seeking his true name, and he found instead the child's heritage—which, as he always did, he mistook for said name. So, Ober, descended from an Oberon, was named.

Raised by more than just his parents, as was Hunter custom, he learned quickly that he enjoyed people. As he aged and began his training, he took to it well. He grew strong and recovered quickly from injury. After he passed his Hunter exam, the Council quickly put him and his partner, Tania, to use.

Together, they were sent out into the Multiverse to kill monsters and protect humans from them. On one of these missions, in a city called Cork, where they were to deal with a monster threat, one of the faeries they fought wrestled Ober's knife from him and sank it into the Hunter's chest. Only after the chaotic battle was ended did Tania find his corpse.

Ober later woke to find his knife beside him. Confused about how he was alive, he took his knife and fled the city, in hopes that he would never have to face the Council again, in fear they would assume him a deserter and execute him.