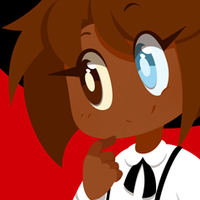 ● Shae hates sitting still, everything is 100% go in her life and if it ever drops below 100% she can get agitated really quickly. She has a somewhat childish grasp of right and wrong and good vs evil so she often sees herself as the hero and hero’s can do no wrong, right? …right?

● Her 'golden hobby' is baking. She enjoys all sorts of cooking but baking is her big favourite.

● When travelling from planet to planet for work her own interests lie in the local wildlife. Also edible things.

Shae has golden brown skin and heterochromia. One eye is a very pale blue and one is brown. She has various versions of her uniform that she can often be seen storming around in. Tan tops and blue pants. But her 'civilian clothes' are often in the same colours too! She doesnt like too much choice when it comes to clothes.

Shae grew up completely sure of what she wanted out of life. She wanted to grow up to be a Data Collector; just like her mum and dad. That was her dream and nothing was going to stop her. She had their support and they helped her learn and train as needed. She attended the same school as Peight but had days where she was home schooled. This is often the case for those who want to be Data Collectors.

After becoming a trainee DC at age 13 she excelled in many things but her over the top drive and dedication was off-putting to many of her fellow trainees. This meant group projects and missions were a struggle for her.

Dylan, Peight's older brother was considered one of the top DCs at this point and tried to help Shae out by introducing her to office worker and social butterfly Dakota to try and teach her some better social skills. What he hadn't counted on was accidentally creating a force to be reckoned with.

Shae and Dakota got on like a house on fire despite Dakota being many years her senior. Between Shae's drive and Dakota's social connections they began growing a name for themselves for being able to get things done.

Nowadays Shae has mellowed out slightly. She has a better grasp on social skills but sometimes her energetic buzz gets the better of her. She has a team of good friends consisting of Dakota, Asher and Kali. Jessie eventually joins the team also.

Dakota can be considered Shae's best friend and her work mum (though don't call Dakota that to her face). They're the definition of controlled chaos and are a force to be reckoned with.

They're quite different and have very different likes and dislikes but it's what makes them work well together.

At first Shae was exasperated at Jessie's anxiety and inability to do much but after looking at him like a work in progress she is very pumped up into helping Jessie become a functioning member of her team.

Shae has effectively adopted Kali as a little sister. Shae enjoys how active and excitable Kali is and they can both work themselves up into an energised chaos state when left alone together.