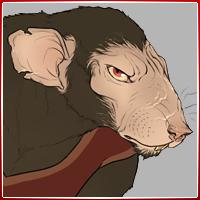 Skirk is over 7 feet tall in his natural, slightly bent posture, though he is capable of standing up perfectly straight when stretching or appearing intimidating. He has dark brown/black fur and red eyes, with slightly yellowed sclera. The edges of his ears are torn in some places, and his whiskers are a bit crinkled. His incisors are often visible even with his mouth closed; his front teeth are traditionally rodent-like, while the rest of his teeth are carnivorous. He has an ample supply of "worry lines". He has several miscellaneous scars all over the entirety of his body; this results in visible scars on the bare flesh, and paler hairs grown over scars beneath his fur. Skirk is missing his right arm from above the elbow down.

Though Skirk is a Skaven (via Warhammer lore), I prefer to draw him with a much broader range of emotions--since official Skaven art only seems capable of making one "grrr" face. I'd prefer anyone drawing him to reference the provided art more than official Skaven art. Thanks!

PERSONALITY:
Skirk is an old soul who's simultaneously sick of everyone's shit and on high alert for problems. He grew and developed in a society of bullies, politics, and frequent assassination attempts, and it has left its mark. At the same time, having survived in such a society for so long has made him little more than exasperated and annoyed when these threats do crop up. He's seen it before, he's dealt with it before, and mostly he's just annoyed to deal with it again. He has little tolerance for other people and prefers to keep conversations brief, on topic, and to the point--with the exception of Daarka, who he doesn't mind sitting and listening to her endless dialogue.