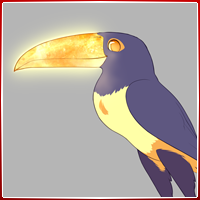 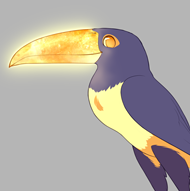 Kishi is upbeat and optimistic, and only seems to be able to speak in third person with simple sentences, often mixing up past, present, and future tense, or using the wrong conjuctions--if they don't forget them entirely.

Kishi is based off a Collared Aracari, which is a subspecies of toucan. If Kishi has a gender, it's never been made apparent, so any and all pronouns are applicable--though someone assumed Kishi was female, and Kishi never corrected anyone, and so they're often given feminine pronouns (Kishi couldn't care less). Kishi has a radiant gem-like beak that glows to illuminate their surroundings. They can control the intensity of the glow at will. Kishi also has unusually long legs, reminiscent of some sort of jerboa. The tips of their nails are the same citrine-like material as their beak.

Kishi is (somehow) capable of healing magic, and uses their beak as a conductor of said magic. It is entirely unclear where this magic originates from, or how much Kishi is actually capable of; an obnoxiously persistent aura of dumb luck seems to follow the little bird everywhere, as if the universe itself caters to Kishi with little rhyme or reason, in ways hard to quantify.

Kishi is capable of speech, but their grammar is consistently askew. Given Kishi's intelligence, there's a non-zero chance this is intentional.

For reference, they're the same size as a standard collared aracari (with the exception of the longer leggies making Kishi stand a bit taller), which you can see here! 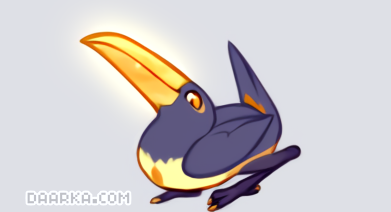 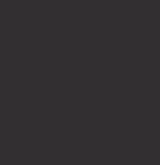