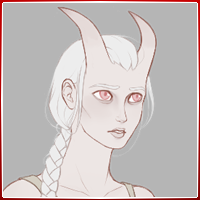 Pale Poltergeist, Madrigal, The Daughter of Exile, The Obsidian Tempest, The Scourge Without Fail

APPEARANCE:
Species: Devil (most comparable to Pathfinder's devils)
Albino with paper-thin flesh and glassy reddish-pink eyes. Slightly sunken features and dark circles under her eyes. Pale, colorless hair, often braided to keep it out of her face. She has smooth horns that arc gently back on her head, and a fleshy, prehensile tail (almost like that of a hairless cat). Axa perpetually looks like she needs a good night's rest. She dresses in soft fabrics that fit her loosely, because her hypersensitivity makes anything else absolute torture.

PERSONALITY:
Axa doesn't say much, usually keeping her mouth shut and watching things happen with a wide-eyed, unreadable expression. She displays prominent symptoms of ADHD, OCD, anxiety, and Asperger's Syndrome, and it can be crippling for her more often than not. She's an ugly crier (and an ugly laugher) and struggles to make friends. She's finicky and high-maintenance, has intense fears of abandonment (amongst other things), and is easily overwhelmed by normal events that are deeply upsetting to her for seemingly no reason.

She's telekinetic (can move physical objects with her mind). She works as an assassin, and has exactly 27 knives that she wields with said telekinesis. They are made of an assortment of sharpened obsidian and sharpened bone, since most metals will reflect light too sharply and her sensitive eyes can't take it. She has 27 because even numbers give her anxiety.

Axa drinks a great deal of coffee, as it's the only thing she's found that eases her attention deficit problems. She barely seems to eat, though, and is prone to spells of psychosomatic "illness", despite devils being incapable of getting sick. She refuses to touch any white foods.

Axa is haphephobic, meaning she has an acute and overwhelming fear of being touched. The only exception she makes to this is allowing her horns to be touched, as long as they are not grabbed or held.

Abandoned at a very young age by her parents and left to die on the streets of Hell, she was taken in by a mortician named Jean, who has since raised her as an adoptive father.