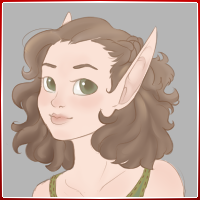 PHYSICAL:
Folly is a faun, and so her most defining feature is having the lower half of a deer--including a short, fluffy tail and a dapple of fawn spots. Her fur is nut-brown with a paler, creamy tone on the inside of her legs and groin, as well as the underside of her tail, and the bottom of her legs and hooves fades into a darker shade of brown. Her hair is a similar nut-brown color, and is springy and curly, cut short at about jaw length. She often wears it with a braid on either side of her face tied together at the back of her head. She does not have any manner of horns (I know the drawing does, just ignore that). Her ears are somewhat elf-like; long and wide and almost resembling the shape of a deer's, and they are able to move and pivot as she pleases. Folly is caucasian, but a bit on the "sun-kissed" side, with some light freckles across her nose and cheeks, and hazel-green eyes.

She wears whatever's easy and comfortable, and only bothers with some form of pants or skirt less than half of the time.

PERSONALITY:
Folly doesn't seem to be aware of her own size and stature, and can be a proper brat at times. Her alignment is strongly Chaotic Neutral, and she's a bit of a wild card in that regard. For the most part, she's a good kid, but easily distracted and preoccupied with somewhat selfish tasks. She's bubbly and upbeat, and naturally talented with most musical instruments. She has racial abilities for healing and growth, and is quite good at patching up Gwen after she's been in a fight. Folly is a bold little shit who would quickly mouth off to someone five times her size--but at the end of the day, she is honestly a real sweetheart.