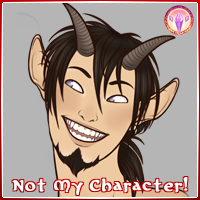 Appearance:
Arsast is only 4'10, with an olive complexion and brown and black fur. His hair is black and just long enough to pull into a short ponytail, with choppy bangs that hang in his face (existing art has him with cornrows, this is no longer canon!). He has lilac eyes, with off-grey/brown horns and cloven hooves, and wide, horizontal, goat-like ears (this is also not shown in existing art, which shows elf ears that are no longer canon!). He has a short-goat like tail and a simple goatee for facial hair, and he wears simple clothing such as harem-esque pants and an open vest for a top, usually with a theme of green through his attire. Almost never looks serious, usually wearing a big shitkid troublemaking grin from ear to ear.

Personality:
Arsast is a mischievous, high-energy little imp of a man. He hates being serious and loves being promiscuous, and has a bit of a short attention span. Despite his goofiness, he's actually quite clever and a quick learner. It's nearly impossible to find him in a bad mood.

His absolute best friend and partner in crime is Ingrid (D&D).