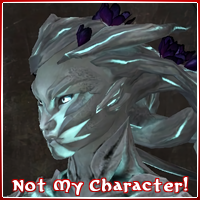 Appearance:
Nikotiemus, unlike most changelings, does not actually take the appearance of another creature. Instead, he lives his life in his "true" form, having who and what he is clearly on display, and using his changeling abilities for minor cosmetic things, such as eye color. Because of this, his appearance is quite simple: alabaster white skin and straight, spidersilk hair of the same color, with glacial blue eyes. He has a tall, slender frame, and dresses pristinely, as he is a nobleman and enjoys his finery, typically wearing colors on the white, silver, grey, and blue spectrums. Not depicted in the visuals: His hair is perfectly straight and falls to about his waist.

Personality:
Nikotiemus is refined and regal in his demeanor, proud and sophisticated. He is also completely deaf, and so his nonverbal means of communication can make him seem aloof or withdrawn. He communicates through a combination of sign language and/or telepathic speech, but despite being deaf, he is keenly perceptive to the vibrations of sounds around him. He has, in a sense, developed an ear for this, and has become quite a prodigal musician due to his unique ability to craft sound based on the vibrations it creates. Music is his greatest skill and certainly one of his greatest interests, but in general, he finds himself incredibly bored with the stuffiness of nobles, and is more intrigued by those who act outside of such molds.

This is probably why he's so drawn to Arseni (D&D), who is perhaps the rudest person in existence. He finds that to be a breath of fresh air, and endlessly entertaining.