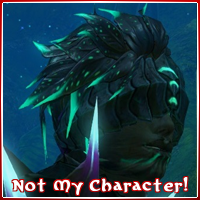 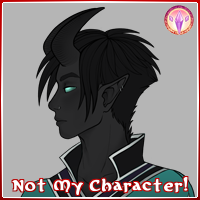 Order of the Lycan Blood Hunter

Description:
Kaleva stands about 5'6", with charcoal gray skin and a lean build. He has choppy black hair that hangs down in front of his horns, short in the back and longer in the front. The palms of his hands and feet are a lighter, more ashen color. His horns grow forward from his head at the base, but then sweep back at a ninety degree angle. He has a long, whip-like tail with a thin trail of hair running down the length of it and ending in a feathery tuft at the end. His eyes are a solid neon teal color, with no discernable pupil or sclera. He has a silver ring on his left nostril, and two silver rings high up on the cartilage of his pointed ears. A scar runs down the right side of his face from brow to cheek, just outside the corner of his eye. He also has numerous scars on his arms from his use of hemocrafting, and a prison brand on the inside of his right wrist, but he usually wears long sleeves to cover these. He can usually be found wearing some kind of leather armor, or belted v-neck tunics over simple pants and boots, and wields a pair of scimitars. He also wears an ankh on a gold chain around his neck.

Wolf Form:
Black Egyptian wolf/jackal, not unusual in size but maybe slightly more muscular than a real one, will need to remove clothing to move about effectively and not draw attention but keeps his ankh necklace on. Looks like a normal Egyptian wolf or jackal except for the color of his eyes, which remain teal, but have black sclera and pupils.