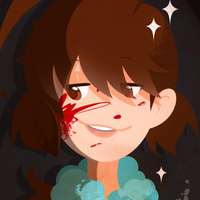 Damian is often described as personable but smug. He is usually smiling and has a polite demeanour that puts people at ease if they didn't know his profession.

● Most people call him Dam, much to his chagrin.

● His ability is manipulating and multiplying Silver.

● He is a vegetarian and he loves Spanish food.

Dam has brown eyes and brown shaggy hair with a cow lick that will not obey the laws of physics no matter how hard anyone tries. And people have tried.

He wears mostly smart clothes but pairs them with his signature grey and blue coat. When working he wears grippy fingerless gloves (he needs skin contact with the initial piece of silver in order to manipulate it) and black sneakers.

Damian never planned to be a contract killer when he was younger, he wanted to be a writer or a lawyer. But it turns out he’s very good at being a contract killer. And enjoys his work very much even if his colleagues leave a lot to be desired.

Upon meeting Shae at a similar job where they were both after the same person, Shae flared up Dam's competitive side and Dam takes great joy in teasing Shae whenever the opportunity arises.

Gets no real benefit from the scenario other than his own amusement.

Dam has an interesting 'friendship' with Dylan. They are polite and get along on the surface but neither of them like each other very much. Due to both their status and position in the universe they have to interact more than they'd like.

Dam sees Zeek as a stray cat that he picked up off the street. He likes that Zeek is able to work independently after a vague order and sees the work he does as invaluable. That said he also sees Zeek as utterly replaceable.