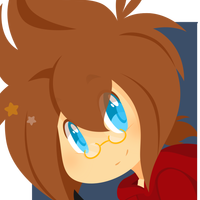 Oh! Do you need help?

● Peight loves to help anyone and everyone to the best of his abilities and usually gets nothing in return, but this does not bother him in the slightest.

● He is a bit of a worrier when it comes to his friends and family.

● He has insane levels of luck.

● His ability makes him a omnipolyglot and this extends to all non human creatures. He can understand every language and, in most cases, speak them too.

Peight has thick poofy hair that is difficult to tame. He pulls the back end of it into a small pony tail but because of the thickness of his hair he's constantly breaking hairties. He has brown hair and blue eyes and wears a small pair of gold rimmed glasses. They're not prescription, they're actually for magnifying so he can see small details.

He wears lots of greens, reds and browns and all his clothes are mainly for comfort. It's not unusual to see an oil stain or a paint mark on his hoodies if he's forgotten to wear protective clothing to work.

Peight grew up in a loving happy environment whith his mom, his dad and Brother (and occasionally his brother's dad). His mom, Ichigo Warschauer smothered both her boys in affection and admiration. Peight's Dad, Stefan Warschauer was very supportive and loving of both the brothers and Dylan's father (Dennis Stewart) was also encouraging to Peight despite having broken up with Ichigo before Peight was born and was often off the planet traveling.

He grew up with his neighbourhood friends, Shae and Sam whom he would see daily and was often out the house playing with them. Sleep overs were a regular occurrence for the trio.

When Sam ran away from home at 8 years old the Warschauer family accepted him into their home with open arms going on to formally adopt him some time later. Peight was happy to have such a warm and full household!

His older brother Dylan had left to train to become a Data Collector (DC) so he was often not about the house but still kept in touch and always made time for his brothers and Shae if they needed him.

As Peight got older he also began training to support the DCs with engineering and such. Creating machines and maintaining weapons was his passion from a very young age and he had the skill to go far. He even got accepted into an apprenticeship programme 2 years younger than anyone else.

He and Sam live together in an apartment close to their respective working environments and are still very close.

Shae is Peight and Sam's childhood friend but over the years Peight has realised his feelings towards Shae have changed. He tries very hard not to let his crush show around Shae as Shae seems not interested in romance.

He worries about her when she's away off planet.

Dylan is Peight's half brother. They share a mother but have different fathers. Despite this both fathers have played large parts in both the boys lives.

Dylan loves his little brother but his laid back attitude is a cause for concern for Peight. Especially when it's regarding his work. "He's too important to be lazing around!? Is there anything I can do to help him??"

Sam and Peight are very close. To the point they can generally know how the other is feeling just by looking at them.

Peight worries about all the trouble Sam gets him self into seemingly on purpose when he pokes and prods at others emotions like it's a game.