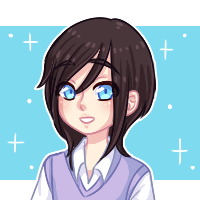 ❝I'm her to support you, no matter who you choose to be.❞

✦ A P P E A R A N C E ✦
Hair | Black, shoulder-length hair. Occasionally pulled into ponytail or bun.
Eyes | Cerulean blue eyes; rounded, with epicanthic folds.
Skin | Pale skin, almost white.
Body Type | Slim and scrawny.
Clothing Style | In Ostara, he favors pastels and cute clothing, such as striped sweaters and shirts with cute designs on them. In Arcadia, his clothing would have been more geared towards protecting from the cold.

✦ A B I L I T I E S ✦
Shion hails from a region of Arcadia in Damaris, and has inherited a strong ability to control water and possesses extended healing abilities. He has relatively average strength and logic capabilities, but is quick on his feet and is well-learned in magic spells. Shion is a pacifist and does not like to fight. He will resort to impeding his enemies via flooding, however. His goal is to subdue his enemies or block them off. He won't drown anyone, but he lets water reach a point where they cannot walk through the force of it without tripping and being swept away. His personal artifact is a fan with paintings of cherry blossoms; it acts as his wand, a catalyst for physically gesturing how he wishes to drive his water. Skill and mastery with water and healing. He can instinctively sense where pain is and ease it with water and energy. Pacifism has resulted in a lack of physical training, making him vulnerable to attack.