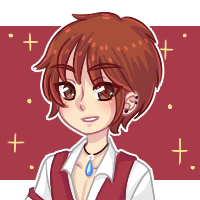 ❝The person onstage is not always the same person you see in front of you...❞

✦ P E R S O N A L I T Y ✦
Nagisa has an idol personality, and his real personality. His idol personality is much more upbeat and positive than he really believes himself to be, and is more capable of inspiring others and performing an art. It is an act, something learned from experience within an idol group and within the music and performance industry. It's not that he is not the same person; he is just much more reserved and private in person. Nagisa is much more shy than he lets on, and would prefer to be an introvert if he could. Since going solo, he has allowed himself that much more freedom; he takes time to craft his songs and to pursue other avenues of self-expression, such as reading and writing novels and poems of his own.

✦ H I S T O R Y ✦
Nagisa was previously a part of the well-loved idol group, LOVE5. The group consisted of several members of varying countries (Toyko, Seoul, Beijing, etc) and showing unity as the first multi-country band in the Eastern Commonwealth. Despite their success, Nagisa was given the role of back-up singer and dancer, and was not as involved in the main vocals as his other members were. His attempts to offer song ideas were largely ignored, and despite his own popularity as a pretty faced idol, he ultimately left the group in order to pursue his own solo career.

Nagisa has been making strides in his evolution as an idol; he's becoming more and more of his own person, and less of the private, paranoid mouse he was before. He had recently decided to be public with his relationship with Shion, an announcement that sent shockwaves throughout all of his fanbase. Idol relationships are often looked down upon, unless it's with another celebrity in a manner that is certainly crafted to be fake, and in this region of Eurasia, same-sex couples are still not entirely mainstream. For Nagisa to overcome his fears and introduce everyone to Shion was a big step forward for him, and was met with surprising amounts of acceptance and love. However, having done so shone a light upon Shion that neither of them had foreseen; the EYE had identified Shion's presence as something otherworldly, and soon, they would begin to track him down.

✦ A P P E A R A N C E ✦
Hair | Currently dyed red; remains the same length.
Eyes | Brown eyes; almond shaped, with epicanthic folds.
Skin | Light skin, with a hint of tan.
Body Type | Thin and fit; made for choreography.
Clothing Style | Tends to wear fashion given from sponsors that he's done advertisements for. Has piercings on ears, and recently started wearing a teardrop necklace that reminded him of Shion.

✦ A B I L I T I E S ✦
Nagisa was not born in a world where magic is widely used, so he lacks any basic training and ability in that regard. However, because of his contract with Shion, his dormant magic energy has been activated. His skill level is beginner, but his body has been honed to be agile and quick. Considering his lifestyle as an idol, violence is not something he encounters much of, aside from anti-fan death threats and the occasional fights between previous band members. He's never had to think about what it means to defend himself or others with actual, real violence. He is largely unfamiliar with most fighting styles, but has had enough experience with karate to know how to handle a hand-to-hand combat scenario. His dancer experience makes it easy for him to pick up the choreography of fighting techniques, as well as agility and flexibility needed to maneuver and dodge effectively. He is well-kept in shape. No magic experience whatsoever, aside from what he's seen Shion do. The contract between them has awakened some magic within him, but he has no real idea of how to control it. He also lacks any weapons experience, and real fighting experience.