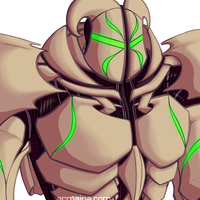 The first heavy class Pretorian model, and second ever constructed pretorian unit, and the one of the few converted voluntarily with no regrets. Generally aggressive but not volatile behavior.

Extremely huge an bulky, as intended for the heavy class of Pretorians, his colors match the desert environment. Muted varying brown and slate colors make up his metal carapace. His decorative elements are a calm green color, a contrast to his personality. His unique face plate bares horns, the intended influence being that of a ram.

Aggressive, hot-headed and generally difficult to get along with. He seems to have a need to assert his authority, however or wherever he can, to make sure other's know his power.

Same now as he was before, Avis' skills mostly center around his physical prowess. His pretorian form's build makes him unique in that his focus is taking out tanks and other large heavy forces of the West Istrese military. The sharpened claws on his hands allow him to puncture and rip off metal plating from hulls of machinery and other such things. His only other attachable equipment is a powerful chain gun fitted with anti-tank rounds.

While not necessarily a strategist, his time as a soldier has afforded him a sort of acute battlefield intuition, able to notice potential threats, counter attacks and other threats in-coming from the opposition.

He keeps quiet about anything that existed before his enrollment with the work force, as far as he is concerned, that's where his life begins, that is where he was born. He does not talk about anyone outside of the military, but he has been seen writing letters to someone no one has been able to find out, save those involved with screening outside mail. (and they know better than to step on Avis' toes)

He has a preference for visual media, enjoying an assortment of movies and live games that he never really talks much about. He also favors animal based activities and sports over typical human sports and activities. In the few times anyone has ever seen him engage in activities with others, he prefers classic board and card games, over electronic ones.

Having a generally unstable home, Rayner enrolled into a military work force at the age of 15, the earliest he possibly could. Working his way fast through education courses, he completed basic training at 17, allowing to him to work as civilian patrol until he was qualified to enlist in the ground armed forces. As his time passed in the military, he became highly decorated soldier, known for his insulting, often dismissive dialog, but his absolute reliability in the field.

Despite his antagonistic behavior, his CO's had overwhelmingly positive things to say about his work on the field, allowing him to progress through ranks easily. When opportunity to lead a troupe was provided, he declined, opting instead to work in the front lines as often as possible, a surprise to those that assumed they knew him. It was only under persistent urging, did he finally take a command position, a position he did not keep for long.

While his first missions were awkward and sloppy, and often draining on his charges, they were successful. Even so with the victories it was becoming quickly clear why he had refused the position for so long. In an attempt to bring his troops in to support another unit under suppressive fire, they were caught off guard by the opposition. Rayner managed to get his troops out from under fire without a loss, but at the cost of himself.

While he had survived in theory, he had lost all use in his body from the neck down. While there were cybernetic options available, there had not been any successful or even approved, for full body mobility. And without true mobility, he could no longer be enlisted in the military. After fighting with doctors about his lack of desire for any assistance, he was approached by a highly decorated general, who made him an offer: Become the new mind for a new experimental body. There was a chance that he could die in the process, and he would have to continue his existence tied to the military, but he would be able to move again if it worked.

The offer was accepted without a moment's hesitation.