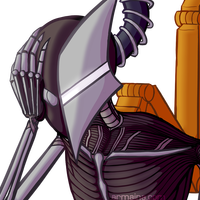 The only member of the Pretorians unit that is stationary, a non-combative unit permanently attached to the base. He serves as the code breaker for the base, both working to encrypt base communications in real time, as well as decrypt any intercepted communications.

His frame generally has the appearance of a light class mech, but far more stripped, with everything from the chest down removed. He is directly connected to the network of the base itself, wires connected to his spine and head, with a support fixture that attaches him to the rail on the ceiling. He bares no paint, markings, or other unique coloration, as it was determined that there was no need to give him any identifying marks.

Before his change, he was particularly gregarious, and generally the source of humor of most any group he was a part of. After being forced into the new body, he became far more of a recluse, preferring only being cordial to his fellow Pretorians. He still is more of the 'comedian' of the group, the one one of humor in the dour unit, but his overall tone is more sharp and bitter than the playfulness he had before.

Not one for direct combat, decrypting and Code Breaking are his primary skills, making him one of the leads in the telecommunication field.

Due to his arrangement attached to just a few rails of the base, there's little much he can do in the way of personal entertainment. He will, however, harass some using the his connection to the network, when he can. Other non-network based entertainment comes from board and card games he plays with Avis, Sab and Munin.

Always enjoying programming and breaking into electronic safeguards, he joined the intelligence division of the military to make use of that preference. He had no desire to make that his only carrier, but he knew spending a few years there would get him a leg up into a private division when he so wanted to.

He and a few others did exceptionally well in his field, considered among the most key members in a type of digital task force.