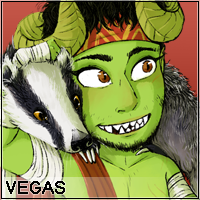 A tiefling vagrant and compulsive liar, is slightly obsessed with a badger he found. Dosen't have the most sound mental health (but then again, who does). Will happily tell a lie to get what he wants, and will also tell a lie to complicate getting what he wants. Has a stutter when forced to speak honestly, pretty accident prone, the fact he’s not been killed already is frankly a miracle. Relies on being fast and dexterous in combat.

A young green boy was adopted as a by a couple of con-men, who travelled from town to town getting what they could with intricate lies. The story of his heritage, where he was from, how he was adopted, changed constantly based on what was useful to the situation. Sometimes he was saved from an abusive household, sometimes he was found on the street. Sometimes he was a demon being hunted by the church and needed a hiding place, sometimes she as a human with a really weird skin condition. Whatever his parents could say to garner sympathy - and in turn money, supplies and food - was what he was. His relationships, his backstory, his personality and even his name changed constantly, often leaving him doubtful of what was actually true.
He often questioned whether his fathers loved him, or if they only adopted him for more sympathy potential, nothing they said to him ever felt genuine. Then one day, they just left.
After mooching a free room at an insolated inn under the guise of ‘ousted nobles’, he woke up one day to find his parents had simply set off without him, leaving nothing but a bag of basic supplies. He was distraught, luckily the innkeeper was sympathetic.
He ended up staying under the name ‘Lord Von Vegas De Warenne’. He explained that the ‘Warenne’ family, while not the richest or most well known in the world, owned a fair bit of land, and few people knew about them because they valued their privacy. After neighbouring lords found out they had a tiefling son, the family were kicked out and forced to wander the continent for shelter.
The innkeeper ate up his lies, as did his family. ‘Vegas’ became a sort of adoptive son, and over the years struck up a close bond with the inkeeper’s daughter, Aoife. She was a beautiful, gentle soul, loved animals and helping things, worked at her uncle’s farm whenever she could, all the good girl typical love interest stuff. She came close to unravelling Vegas’ lies a few times, but he would always pull her back in - ultimately, the girl was too trusting off him, and didn’t question him too much. Vegas was happy, finally having a home, a story, a name he could call his own, even it it was all based on a lie. He did consider telling his girlfriend the truth, but couldn’t bring himself to do so. What was the truth? That he was a nameless con-man who’d lied to dozens of people? He couldn’t bear to risk losing her.

Over the years, Vegas saved pennies to buy a ring - sometimes from honest work, but usually from quick scams from patrons at the inn or nearby towns. It seemed his future was set in stone - they would be married, have children, someday inherit the inn. He proposed, Aiofe accepted eagerly, and the two were married shortly after in a small ceremony attended by locals. Of course, so many people in such a small place, people who had suspicions about Vegas, all talking about him behind his back…
It wasn’t long before his new wife found out.Vegas finally caved in, and reluctantly explained who he was - a conman, a trickster, who had lied to people for sympathy and free stuff. For a moment, he felt relieved, finally no longer living a lie, until he saw her face… full of disgust. She asked him to leave, and never come back.
And he never did.

Following that, Vegas took after his parents, wandering from town to town conning townsfolk, and leaving when they got too suspicious. Of course, he was nowhere near as talented as his parents, and a scruffy green demon arose more suspicions than a couple of humans, leading him to go hungry often and forcing him to steal food and valuables (not that he saw anything morally wrong about this, of course, it was just more work and less fun). Everywhere he went he made up a new story for himself, but one lie often remained consistent - his name was Vegas. Whenever forced to speak the truth about his past, or even himself, he found it very difficult and would instead make up an even more ridiculous lie. He grew close to a few people, but left before it got too deep - he didn’t want to risk losing people again.

As time passed, Vegas was able to push the memories of the life he almost had to the back of his mind, though there were moments where the mental trauma came back in odd ways. One such instance was as he was working on an estate, ‘filling in for somebody who had just left’, though mostly just looking for stuff to snatch. The estate had had troubles with pests recently, and the landlord was planning on capturing them all and culling them all at once in a fire as a morbid display of power. Vegas didn’t normally care for animals, but when he saw one of the badgers, starving and shut away, it reminded him of his sweetheart - how much she loved animals, and how she couldn’t even bear to shoo away a mouse. He knew he could not let the pests die.

Long story short, the animals were freed, the estate suffered a massive fire, and a few servants probably died. Vegas left with Badger reluctantly held between his arms, and a bounty to his name.
He continued travelling a bit more with Badger by his side, at first the critter was hostile, attacking Vegas at every opportunity but unable to run away due to his impromptu harness. Eventually, he was able to tame it a bit more - it was by no means a loyal pet, but Vegas would pet and feed it and it would tolerate him. The main problem was the newly minted bounty, forcing him to travel north to avoid the demand for a ‘green tiefling with a stolen badger’ - if he was caught, all his past misdeeds would catch up with him and it probably wouldn’t end well. He figured the best way to avoid the bounty was to travel far… quickly. Possibly by water.

[ Parents ] A couple of human con-men who travelled from place to place doing… whatever they could get away with. Percy was a silver tongued master of manipulation and frequently made use of a hat of disguise he stole years ago, often disguising himself as a helpless young lady for free goods. Reynard, on the other hand, was quick-handed and had less patience for mind games. He often dressed as somebody good and noble to let down victim's guards, sometimes stealing their possessions in plain view. After working together for a few years, they took in Vegas as a baby, and raised him as their own - he went on to inherit Percy’s love for dress and Reynard’s dexterity, and both of their’s underhanded way of life. Since Vegas had no ‘real’ name, and his fake name changed constantly, they often just called him ‘kiddo’.
The story of how they came into possession of Vegas, and how they raised him, changed every time they met somebody new depending on what worked best for the lie. While they were often relatively good parents who loved their son, sometimes they’d flip on a dime and be very strict or cruel. They had a tendency to get angry whenever Vegas talked, out of the fear that he’d say something that’d mess up the lie, and taught him constantly not to question their stories or who he was. Overall though, they had his best interests at heart, teaching him to live in a world where he had to lie to get by. 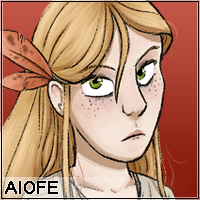