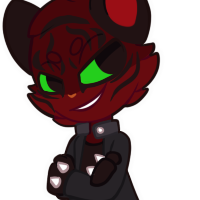 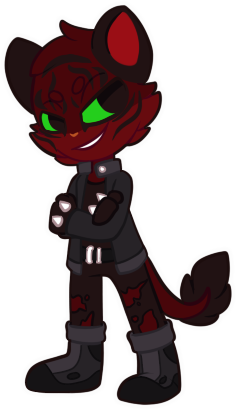 Ira has a really dark sence of humor. He laughs at the meanest jokes and gives off a very mean impression by this. This makes it hard for him to make friends and to keep them. Only the ones who can really poke through this sense of humor can see he isn’t as mean as a lot of people think he is.

His usual, grumpy expression is mostly in place. This is beause of his rather short temper. Be sure not to anger him, he's strong and won't hesitate to fight. He's got spirit and ambition for the things he does and he's not afraid to hold back.

Ira is a good speaker in public. He knows what to say to people to convince them of certain things. He has good arguments and knows how to use them, however, he's also easy to be influenced or manipulated. This is partially his naivety speaking, but also his lack of knowledge of the real world, seeing as he got homeschooled a large portion of his life.

Ira is a hard worker. When he sets his mind on something, he needs to get it done. He’ll work hard to achieve his goals and to make them work out well. He is kind of a sadist. He often likes to get into fights and he loves it when he wins. A bit of bloodshed isn't horrible either, sometimes it can spice up things.

Ira well... He has quite a temper. He is easily frustrated and gets angry pretty easy. When he's angered, he has to release it somehow, sometimes it's in a battle, sometimes it's by kicking a tree. As long as he gets the anger out. 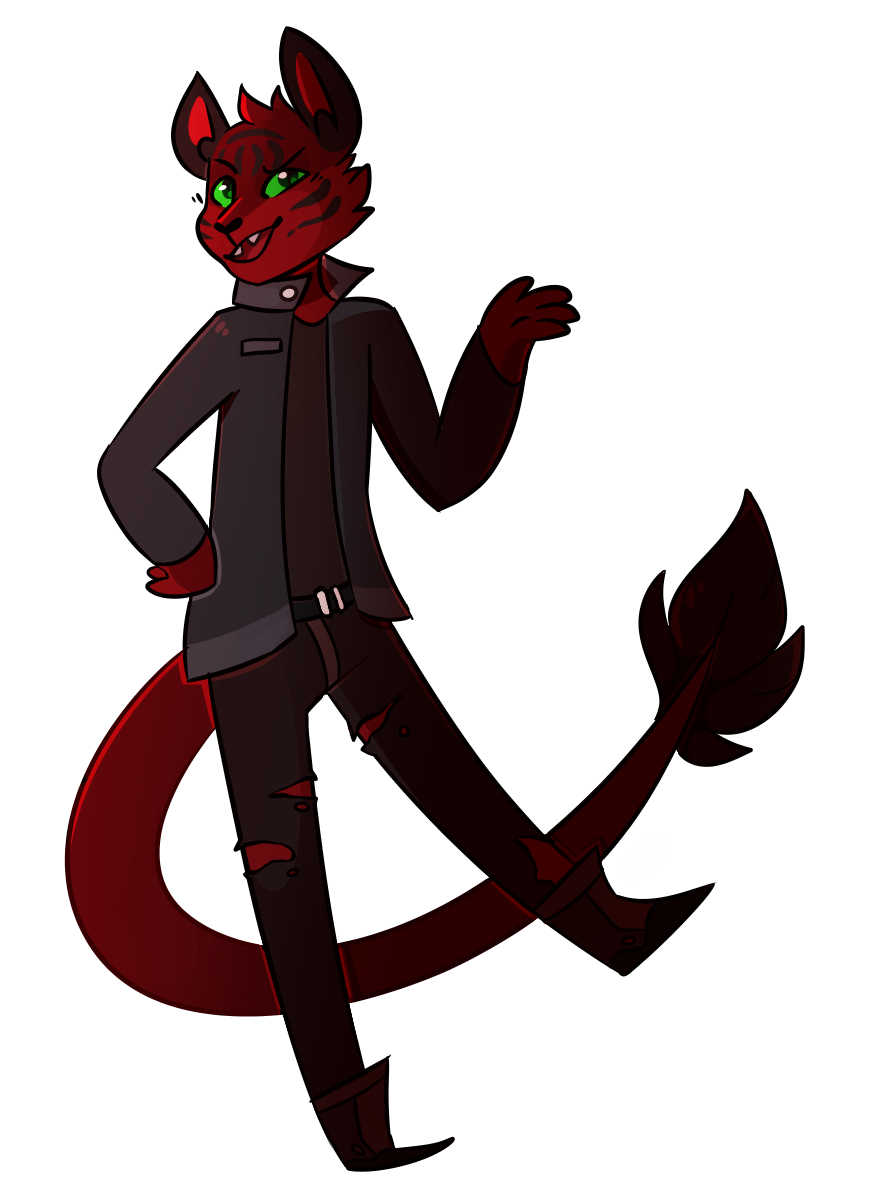 Ira is a large built liger, he’s really muscular. His face has sharp lines and he has crystal white teeth. His bodycolour is a deep dark red. The inside of his hands and the bottom of his feet are black. His eyes are the brightest green you’ll ever see. He has a strong body. His legs are long and agile and he can run pretty fast. His tail has a fluffy black tip. He has big sharp claws on both his hands and feet. Because he’s still an adolescent, he doesn’t have manes. These will come when he reached adulthood. His face has the stripes of a tiger, they fade out as they reach his neck, to make place for the deep plain red again. His belly is a slightly lighter shade of red and the marks on his face are like the insides of his hands and feet black. He usually wears a black top, leather jacket, black jeans with rips in it, black armyboots and gloves with spikes. (The reason his scleras are green is because of his blood. He has green blood, yep.) 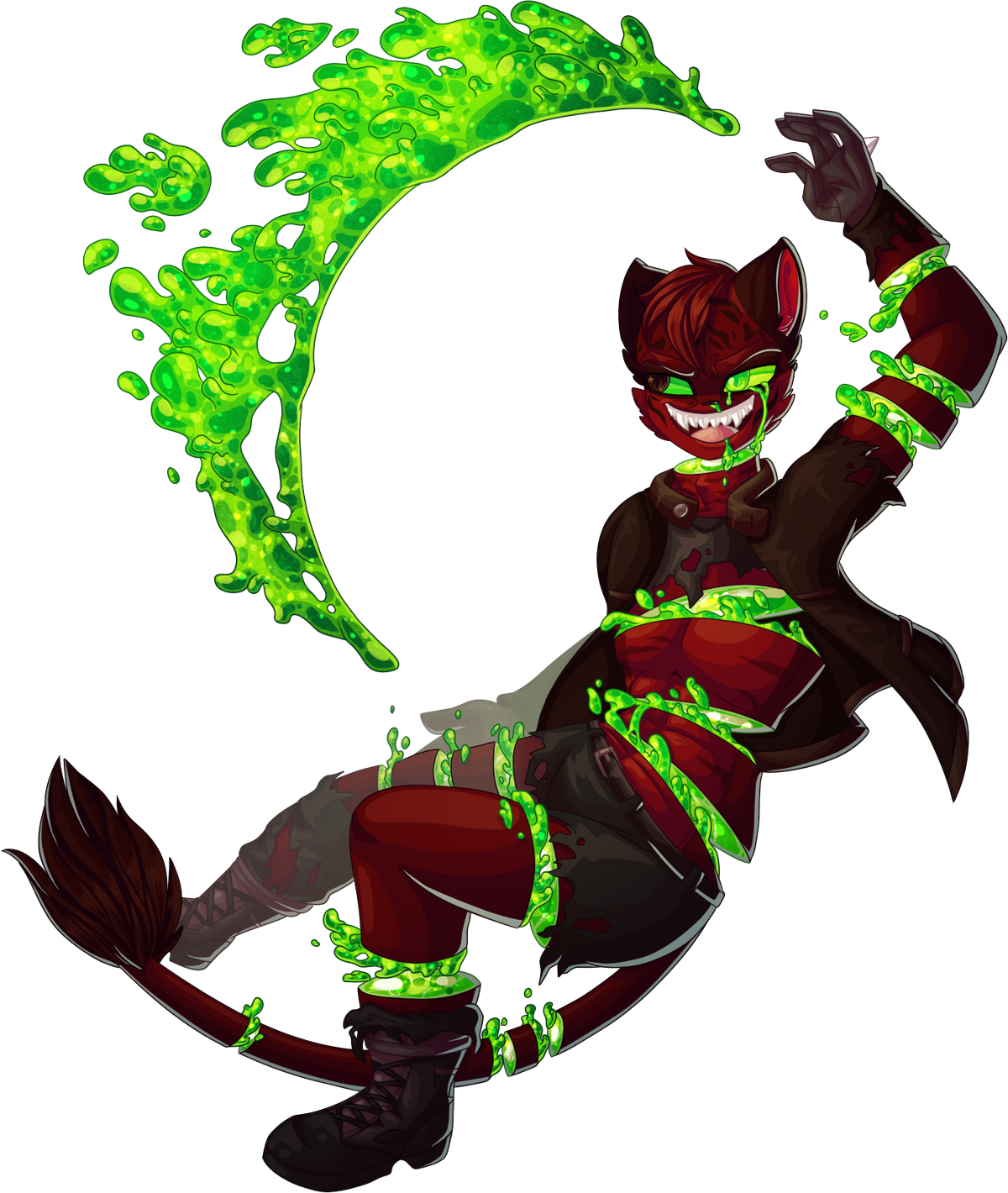 Ira is an only child, born and raised in Castle Town. His father is a tall and strong lion, his mother a kindhearted tiger. He inherited his blood bendingskills from his mother. She comes from an ancient bloodline of bloodbenders. When Ira was two years old, his parents were almost forced to sell their house due to financial issues. They could barely pay the debts but made it. The reason for this money shortage was that his father lost his job at the local contruction company. He was head of the construction workers but his boss thought he wasn't efficient enough. Fast forwards to when Ira was five. This was when he first went to school. He had trouble fitting in but managed to make friends after a few months. Unfortunatly these friendships didn't last and Ira had to go to a different school because of the regularly occuring fights he got in when he was about ten years old.

This school was a school that focussed on the physical development of a child, meaning: they trained and spent more time in PE with the kids so their stamina grew and the children would take tests to see if they had any special gifts or abilities. Quite a few kids in Ira's class had the ability to control one or more of the elements. The tests didn't show any results on Ira however and the teachers and his parents thought that he hadn't had inherited his mother's gene for bending.

This seemed to be incorrect after two years, when Ira was twelve years old. He once got really upset during class and started focussing really hard on the teacher's movements and gestures. Suddenly, the teacher couldn't move and after a minute Ira realised it was him controlling the teacher. At that point he made the teacher do crazy things like pretending to be flying and scratching his head like a monkey gone feral. When he got tired of the focussing he let go of the control and let the teacher, whom had already figured out what was going on, return to normal. Ira was sent to the principal who in their turn called his parents. He got sent home and when he got there his parents were incredibly excited that he had inherited the gene after all. After Ira finished the schoolyear he immediatly got homeschooled by his parents, or well, his mother. She taught him the tricks of bloodbending and the usual schoolstuff. Ira is in college and is studying electronics. He's always had a big interest in how things are connected and work together. He wants to know everything he possibly can about how to set up good systems and how to install electronics for big events such as festivals, carnivals, theaters and cinemas. He has an internship at a rather large company and oftentimes gets sent away to do small jobs like setting up the speakers and microphones for small garage bands on small festivals.

Just a while ago, Ira met a strange girl. A girl with red fur and green eyes, just like him, but softer. The colours were all kind of pastel shades. She reminded him of someone he thought he knew, but he just couldn't quite put his finger on it. The two talked for a while and it turned out the girl was a Kaah-Ni as well. Her intentions seemed harmless and innocent at first, but slowly but surely she started to gain more and more influence on Ira. It turned out she wasn't as innocent as she seemed to be and it turned out she had managed to kill numerous people in the past without getting caught. She's a highly wanted criminal but for Ira it was too late already. Her grip on him was too tight and he slowly started to derail as well, mostly training his abilities and pushing his limits on how far he can go, but also committing small crimes like shoplifting and pickpocketing, something he never used to do before. It's getting worse by the week and people fear for what might happen sooner or later.

Turns out: Ayuna is a fucking bitch! After they've been together for a while, Ira started to see some extremely toxic things in their relationship. However, he loves her too much to just cut her out of his life. He's torn between picking up his old life and getting rid of her, and staying with her to pursue her goals in life.

NB: His powers are getting stronger, he's getting more endurance and he's starting to feel the rush of power, the power to hold someone's life in his hands during fights.