Omega is very aggressive and hostile. If he's seen you, he's probably already readying a knife to stab with. He's only docile when around his wife or when he's had coffee.

Omega was born from a very unfortunate event. Just as two Felsylians were creating their world together in their minds, they had to trap an Osiri and its master, another Felsylian, in the world. The Felsylian and Osiri were separated, and out of rage, it took advantage of another Osiri native to the world. The result left the female Osiri traumatized, with the two Felsylians that created the world helping her recover and take care of the child, that child being Omega. He had seemed so innocent and adorable in his early years, but it didn't stay that way.

Omega eventually was left on his own. His mother had died a few weeks after the birth, and the two Felsylians had wiped his memory to ensure he had no knowledge of their involvement. As far as he knew, his parents were both dead, and he was on his own. He had started to become very hostile towards others. He took a liking towards knives, and sold drugs to either get money or just so he could kill those he felt were dumb enough to come too close. He had started to pester one specific individual for quite a few years, and through him, he had met Syalval, a Larthenparsel. At first they were simply neutral to each other. After about a year, they slowly started to learn that they liked each other, with the concept of love being new to the both of them, and eventually got married. They later on had two children, Ash and Ethyl.

Her nickname is "Anti". They live together in her "church". She's a Larthenparsel, a large, dragon-like being. It's an unlikely match, but they love each other anyway. 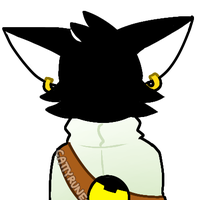 One of the Felsylians that created the world Omega lives in. Omega tolerates him, but still despises him.

The other Felsylian that created the world Omega lives in. Similarly to Twig, Omega will tolerate her, but still despises her. He has stabbed her in the eyes before, however.