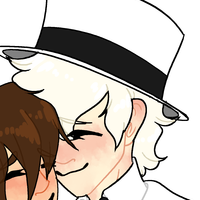 Percival is a very bright, cheerful guy. He enjoys doing magic for children. He's usually very good-natured about everything. Very rarely does Percy get upset. When you do make him upset, you've done screwed up.

Percy doesn't really fight so much as help others train or learn. Granted, he can kick tail when needed, but he's a very peacful person so doesn't often get aggresive (anymore).

Percival wasn't born at Sky-Top, but rather while his parents were out and about in Knockturn. He had brown hair and hazel eyes like his family at first.

When he was about 5, he came across bleach, and nearly drowned in it. (Hence his disliked for swimming...) Thankfully, Wykin came around. She did her best to reverse the effects of the bleach. while Percy ended up not being affected mentally by it, it'd permanently damaged his skin, eyes, and hair pigments. Though his family tried everything, even dye, nothing fixed it.

Percival was bullied behind the adults' backs for how he looked, even being told he wasn't a human, but a demon. He was too scared and hurt to stand up for himself or tell anybody. He eventually began shutting himself away and avoided playing with other kids. Until Koa came around, Percy was a pushover.

On one year in which the Monarchy Convention was being held in the Rose kingdom, Percy's parents decided that Percy would have to come along, hoping that perhaps he would start being social if he wasn't shut in his room all day.

Of course, Percy hid out in the library, thinking others his age would never go to a library if they didn't have to. He was followed by the other kids who had come along. They began teasing him again. However, Koa also happened to be in the library as well, looking for tricks to play on his sister. He came over and confronted the humans, confused by the commotion. The Rose prince probably would have left them alone after being told to mind his own business, but after being called a 'stupid weed' that 'poked his face where it didn't concern him', Koa figured out quickly what was going on, and unleashed the booby trap he'd made to get Amber with later.

Covered in goop and embarassed, Percy's bullies left. The two ended up friends, and together they began their experiments with magic, so Percy could defend himself from the other kids. Their siblings weren't sure whether their friendship was good or bad, mostly because they now either left them alone or pranked them hard.

With Koa's help and encouragement, Percy went on to become the most well-known Dream-Spinner, even being a good candidate for replacing Sleepwalker's magic. Since the two had learned by playing games, Percy grew found of the Games, and started a great deal after becoming the Clockwork Monarch.

While Percival was loved and admired, Hermes ended up feeling overshadowed by his brother. Jealous, he hired somebody to kill Percy.

Thankfully, Percy survived just long enough for Sakura to find him left for dead on the kingdom outskirts. With the help of neighbors and friends, she carried him home and nursed him back to health. They ended up hitting off during his time at her house. After he left, he invited Sakura to come to Sky-Top. Needless to say the prince was a disappointed when she declined and instead began traveling. He once jokingly started a Game in which people were supposed to find her, because Percy couldn't figure out where she was most of the time.

Percy stays in Sky-Top most of the time, mostly because the outdoors seem to hate him so much. (He hates it, too!) He does visit other places on occasion, but usually sends letters by magic.

The Sleepwalker can be a bit... Much. He'll admit that, but he genuinely tries to get along with her. Percy often visits her up in her lair. Sometimes, though, she gets to be too much, and he'll start to avoid her. Percy appreciates Wykin and everything she's done (for the most part)- things could have been, and once were, terrible. Their relationship grew more tight-knit as Sallentine continued to develop. Percy has always cared about Sakura. They are Original Sallentine, after all. He regrets how cruel he used to be to her, and looses sleep wondering if she remembers any of it. He's too scared to ask her whether or not she does. Ever since Koa stood up for Percy all those years ago, he's admired the Rose. The two are like brothers- and Percy wouldn't trade his brother for the world. It breaks his heart when Koa forgets their old antics. Alas, there isn't much Percy can do to help Koa's poor memory.

HTML by Eggy and modified slightly by myself