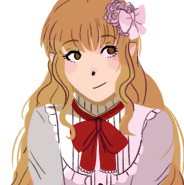 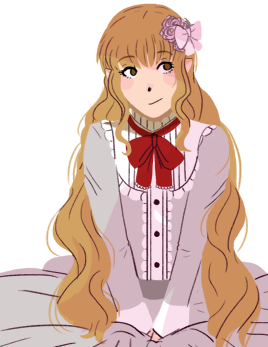 "Your secret is safe with me!"

Anna is a noble vampire from far north. Coming from a culture where silence and non-verbal communication are favoured, Anna has some trouble striking up conversations with others and approaching people, but she tries very hard to be a pleasant person to be around. She has a very mild temper and tends to talk only when asked when around new people, but with those she likes Anna opens up considerably.

Anna's teeth are very small for a vampire, and as such she often experiences trouble drinking blood. However, as compensation, Anna is surprisingly good at making people trust her when she just wants to, so hunting isn't completely impossible for her. Much like almost all noble vampires, Anna makes sure to always let her victims live and avoids hurting them as much as possible. She is very aware of her status as a noble and her role as an example-giver to other vampires under her command. She has a high sense of noblesse oblige: she thinks her position means she has to do her best to use her status for good and be of help to others.

Anna is a relatively short girl of 156cm with very light build and small bones, making her look even smaller and more fragile than she actually is. Her body shapes are very nonexistent and her body looks very young in that aspect, although Anna is usually portrayed as a young adult. She has round, brown eyes and wavy, strawberry blond hair usually either tied up on two large side ponytails or left completely open. She also has a very small, doll-like nose and generally delicate and young-looking facial features. Her vampire version also has longer ears that are slightly darker from the top.

She is most often seeing wearing white/light colours and very detailed and decorated dresses.

Anna is noted to be really calm and silent by nature: she answers only when asked, and usually in two words or less, making her often appear as a person who doesn’t want company and prefers being alone. However, in reality Anna is very affectionate and likes to have people around her - it just takes some time for her to start trusting and opening up to others. When meeting new people Anna can be quite jumpy and timid, but tries her best to keep up the conversation.

Although Anna might come across as very timid and nervous, once she is used to the people around her she shows her more playful and teasing side. As she is very observative, Anna tends to notice fast if someone is having a crush or trying to hide something harmless but embarrassing, and loves to tease people she likes. She also becomes really talkative on the subjects she knows a lot about, especially dragons. Dragons are her passion, and she has vowed not to marry anyone who isn't a dragon, making it hard for her parents to find her a suitor. Anna is also very passionate about horror and art, and she is rather good at drawing, even if she prefers drawing almost nothing but monsters.

When encountering new things, she needs some time to get used to them. It’s really important for her to know about changes and new things beforehand as she needs to mentally prepare herself for things. If you ask her to do something right now, she’ll get nervous and the outcome won’t be the best possible as she tends to be too nervous and scared of the sudden task at hand.

As a vampire noble, Anna knows how to behave and what to say to people. However, vampire Anna is the most silent out of all her alternative universe selves, and usually talks only to Daniel and Rowan of her world. She used to be a little self conscious about her small teeth but she has learned to be proud of them along with the rest of her body. Vampire Anna is slightly prouder than her other versions, probably due to her status as a noble vampire.