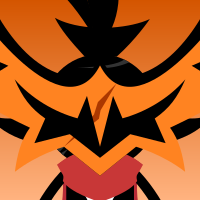 "I'm more than obliged to have you around. I'll give you my all."

Yashipon had been a Tatepon back before he joined the Patapon army in their quest to recover their lost homeland and defeat Ormen Karmen once and for all. Having seen and experienced a lot of things a war can do to someone like him and everyone else in the way, he decided to retire after the sorcerer was executed for his crimes, therefore being one of the many Patapons who did not take part in further expedition beyond their own kingdom. Yashipon was hoping he would get the break he deserved, but the Second Archfiend War also brought the threat of Bonedeth invasions in Pata-Pole. He reluctantly joined the defense against it being one of the many capable warriors to fend off the undead menace, throwing himself in yet another war.

After the war concluded, Yashipon moved to the Menkame Village from his home in the capital city to have a quiet, peaceful life once more. All of that changed again though as he followed a trail of light that ended some distance away from his house out of curiosity and found the mask of Taterazay. The old man couldn't believe that a powerful artifact manifested in Rolitoland, and thus was cautious at first. Having heard of the legends though, and against his better judgment, he put his mask on and all went blank as he soon was met with immense pain and fell into unconsciousness. He woke up the next day with some of his memories locked away, but he still remembered how to put up a fight with bladed weapons and a shield.

Despite having no family of his own and no heir to inherit what little he has, Yashipon cares deeply for children, and will do everything in his power to ensure they are safe from any harm and that they grow and develop into capable and responsible adults. He is a simple man when it comes to what he wears, and he doesn't mind his physical scars too much.