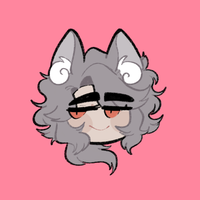 "Hey now, there are better ways to go about this, no need to get violent."

One of the most powerful kitsunes to exist in the mortal realm of Mythys. When the time came, instead of coming along with his sister, he decided to stay behind and become a mask maker instead, following his passion. He has a deep interest in creating things from scratch since he was small, and leaving for the heavens would surely rob him of his chance to do what he loves most.

During the time Penelope was away, he fell in love and got married to a human woman. Unfortunately, life wasn't so merciful on her. She soon succumbed to illness and passed away. He spent quite a long time grieving over her death before finally deciding he needed to move on. Then, on one of his strolls, he stumbled upon a toy store in an unfamiliar forest. Curious, he stepped in, only to encounter a rabbit lady.

Sai is very straight forward in terms of his emotions and opinions and isn't afraid to show complete dedication to those who he treasures most. He'd only resort to violence when pushed to his absolute limit, or when he deems it the only way to resolve the problem.

When he met Eureka in the toy store that day, he was immediately captivated, not only by her beauty, but her handiworks and how she hard-working she is. He kept coming back to see her, eventually staying at her place as well. Over time, he developed feelings for her, and after thinking it through, he proposed. After their marriage, he decided he'd move in to be closer to his beloved.

Someone he had looked to since they were small. Unfortunately due to their disagreement in ideals, they have not spoken to one another since she stormed off. Though he thinks her ways will bring nothing but destruction for both parties, he steers clear away from interferring out of the respect he has for her.